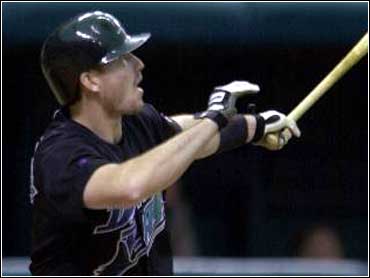 The Chicago White Sox let one slip away.

John Flaherty hit a three-run homer with one out in the bottom of the ninth inning to lead the Tampa Bay Devil Rays to a 5-3 win over the White Sox on Sunday.

"I was probably as focused on that at-bat as I've ever been in my career," Flaherty said. "He made some great pitches to me that whole at-bat and I was just trying to battle. It seemed like my confidence level was rising as the at-bat went and I finally got a good pitch to hit."

With one out in the ninth, Kelly Wunsch walked Jose Guillen. After pinch-runner Jason Tyner stole second on a pitch-out, Bob Howry (2-3) walked pinch-hitter Miguel Cairo.

Flaherty, who also had an RBI single in the seventh, worked the count full in a 12-pitch at-bat. He then hit his seventh homer of the season for the game-winner.

"It was a fastball, I tried to throw it away," said Howry, who blew his sixth save opportunity in 11 chances. "It started out there, but it just ran back over right down and in where he likes it. You try and locate a pitch somewhere that he can't hit it hard. I definitely didn't do that because he hit it pretty well."

Manager Jerry Manuel said Keith Foulke, who has 21 saves in 25 opportunities, was not available after saving the first two games othe series.

Albie Lopez (10-8) allowed three runs and five hits in his second consecutive complete game and fourth of the season.

"I was just throwing strikes ... that's it," Lopez said. "That's basically what I've been doing all year."

Lopez is just the second Tampa Bay pitcher joining Rolando Arrojo with 14 wins in 1998 to reach double-digit victories in a season. Lopez is 8-4 since joining the rotation on May 28.

"We obviously feel that we could have had another ballgame," Manuel said.

Chicago starter Jon Garland gave up two runs and seven hits in seven innings. In his previous two outings, the rookie right-hander was touched for 10 runs and 17 hits in 9 2-3 innings.

"A great outing, exactly what we needed," White Sox catcher Mark Johnson said. "We just didn't take advantage of it."

There has been speculation Garland might have lost his spot in the rotation without a strong outing.

"It's not my decision," Garland said. "I just want to go out and have a good game. I got ahead of guys and was able to throw strikes when I wanted to."

Frank Thomas, who started the day tied for the AL home run lead, put the White Sox up 2-0 with a fourth-inning solo homer. Magglio Ordonez, who went 6-for-12 with six RBIs in the series, had a run-scoring double in the sixth.

Gerald Williams hit a solo homer for Tampa Bay, which concluded a franchise-longest homestand at 7-6. It's the first the Devil Rays have won more than six games on a homestand.

Jeff Abbott opened the Chicago third inning with a ground-rule double that landed and remained on top of the left-field wall padding. He later scored on Ray Durham's grounder.

Garland retired nine straight before Williams started the bottom of the fourth with a solo homer that made it 2-1. The homer was Williams' career-best 18th.