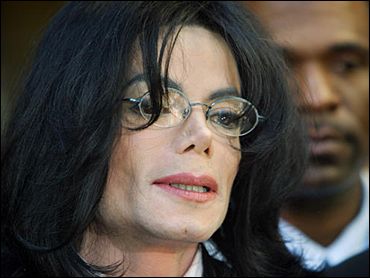 Michael Jackson's prosecutor is opposing a move by the pop singer to reduce his $3 million bail, arguing that he may be planning to flee the country.

According to a motion obtained by media lawyers Sunday, District Attorney Tom Sneddon's office said Jackson's immense wealth requires at least $3 million bail to ensure he will appear for trial on child molestation charges and, if convicted, would be prepared to serve a lengthy prison sentence.

"The temptation to flee must surely be strong for an individual in defendant's circumstances," said the motion. "To suppose otherwise would be to blink reality."

The prosecution motion, written by Deputy District Attorney Gerald McC. Franklin, envisions the risk of Jackson living out the rest of his life as "a wealthy absconder" rather than facing a life term in a California prison.

The document included a footnote alluding to the case of Andrew Luster, an heir to the Max Factor cosmetics fortune who fled from Ventura County to Mexico during his rape prosecution "notwithstanding his $1 million bail bond." Luster ultimately was captured in Mexico.

Franklin conceded that the county bail schedule calls for a potential maximum bail of $435,000 for the child molestation and conspiracy charges against Jackson, but he argued the performer is no ordinary defendant and the bail schedule does not apply to him.

"The people mean no disrespect by the following, but Michael Joe Jackson's situation is truly unique," he said. "By all accounts, defendant is well-to-do."

He cited Jackson's holdings of 2,000 acres in Santa Barbara County as well as other property.

"The defendant here is 'Michael Jackson, international celebrity,' a man whose life style to date would not have prepared him to adapt readily to a prison environment and routine, and whose physical stature will present its own problems for him in making the necessary adjustments.

"Mr. Jackson has doubtlessly given those realities considerable thought," the motion said.

Franklin also suggested that a number of countries would welcome Jackson if he fled.

"Mr. Jackson is known and adored - 'adored' is not too strong a word - in many of the countries of Europe, the Near East and Africa," said the motion. "Several of those countries do not have extradition treaties with the United States."

The motion acknowledged the defense argument that Jackson has made all of his court appearances but argued, "One good reason for his having done so is the severe consequence of not having done so. Three million dollars is a lot of money to leave behind, even for him."

Jackson has pleaded not guilty to child molestation, administering an intoxicating agent, and a conspiracy count involving allegations of child abduction, false imprisonment and extortion.

Many details of the indictment remain under seal, and media outlets, including The Associated Press, have sued to have the indictment and grand jury transcripts unsealed in their entirety.

In a separate motion, prosecutors said they agree with Jackson's attorneys that secrecy should continue.

The prosecutor said jurors "should learn about the evidence while seated in the jury box, not at the breakfast table or from late-night talk shows."

The motions are scheduled to be argued at Jackson's next hearing May 28.