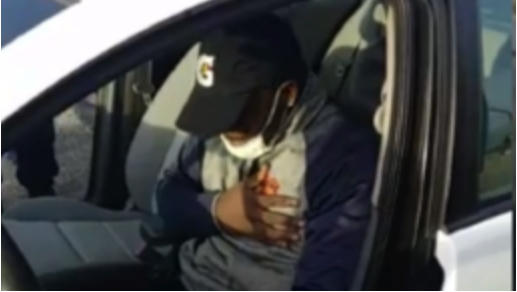 Trenton Lewis is a single dad who works at a UPS facility in Little Rock, Arkansas. His shift starts at 4 a.m. And without a car, he got there on foot, walking 11 miles round trip every day to keep his job.

Lewis' legs ached from his long daily trek, but his 14-month-old daughter, Karmen, is the reason he persists.

One day a coworker got wind of Lewis' daily ordeal. Patricia "Mama Pat" Bryant is like a "second mother" to Lewis. Her husband, Kenneth, works at UPS as well. When Mama Pat learned about Lewis' 11-mile walk, she was upset. She told her husband, who began to devise a plan to help Lewis.

The Bryants quietly spread the word and started raising money to buy him a new car.

Eventually, the Bryants had raised $2,000 in donations from fellow UPS employees and retired employees. Some of them didn't even know Lewis, but wanted to help.

The group of coworkers organized an early morning meeting. Everyone in attendance knew what the meeting was about -- except for Lewis.

"I heard about this story back in October," Kenneth Bryant said at the meeting. "The story was that we had a dedicated young man that really wanted to come to work and he proved that because he walked to work," he said of Lewis, who stood amongst the group of coworkers.

The meeting was held in a parking lot where a 2006 Saturn Ion sat. Little did Lewis know, that car was about to be his.

"So, I wanted you to know these people donated sight unseen. Which means, they never saw you but from what I told them, they trusted me to do what I said I was going to do," Bryant told Lewis.

Then, Bryant took out the keys to the Saturn and handed them to Lewis.

"So, on behalf of all of us and them, we would like to present you with this helping hand," Bryant told Lewis, who was stunned.

He walked over to his new car and got in.

"Y'all are going to make me have a heart attack at 21," he joked while sitting at the wheel.

He got choked up, thanking the group profusely, telling them he was about to cry. Then, Lewis took his first ride in the car. First stop: picking up his daughter for a bite to eat.