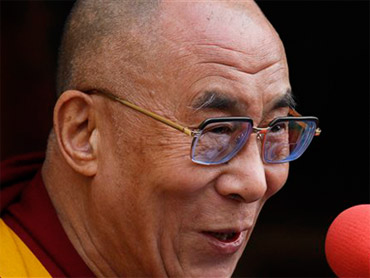 The Dalai Lama blasted Chinese authorities Wednesday, accusing them of trying to "annihilate Buddhism" in Tibet as he commemorated a failed uprising against China's rule over the region.

The Tibetan spiritual leader's angry comments appeared to signal his frustration with fruitless efforts to negotiate a compromise with China. However, he said he would not abandon talks.

Beijing has demonized the Dalai Lama and accused him of wanting independence for Tibet, which China says is part of its territory. The Dalai Lama says he only wants some form of autonomy for Tibet within China that would allow Tibetan culture, language and religion to thrive.

The dispute turned violent two years ago, when anti-government protests erupted in Tibet and China cracked down on the region.

The police presence in the Tibetan capital of Lhasa has been heavy ever since, but was stepped up even more in recent days with rifle-toting police guarding intersections and demanding to see ID cards at checkpoints, hotel workers said.

"Because of the March 14 riot anniversary, police are patrolling in the streets every day, and they are conducting more checks," said Luo Wen, a receptionist at the Lhasa River Hotel.

In his annual address from exile in India to mark the 51st anniversary of a failed Tibetan uprising against China, the Dalai Lama said Chinese authorities were conducting a campaign of "patriotic re-education" in monasteries in Tibet.

"They are putting the monks and nuns in prison-like conditions, depriving them the opportunity to study and practice in peace," he said, accusing Chinese of working to "deliberately annihilate Buddhism."

The Tibetan leader said that "whether the Chinese government acknowledges it or not, there is a serious problem in Tibet," but attempts to talk to the Chinese leadership about granting limited autonomy to the Tibetan people had gone nowhere.

"Judging by the attitude of the present Chinese leadership, there is little hope that a result will be achieved soon. Nevertheless, our stand to continue with the dialogue remains unchanged," he added in his speech, which was made in Tibetan.

China's Foreign Ministry did not have immediate comment on the Dalai Lama's accusations. Phones rang unanswered in the spokesman's office at the United Work Front Department, which negotiates with the Dalai Lama's representatives.

Zhou Yuan, a Chinese academic at the China Tibetology Research Center, which holds views in line with the government's, said the Dalai Lama was angry over failing to achieve Tibetan independence and denied that Beijing was engaged in religious persecution.

"It should not be doubted that China has a policy of free belief. The government does not interfere in people's religious activities," he said.

The Buddhist leader's comments came during a tumultuous moment in relations with China.

In January, Beijing reopened talks with his envoys for the first time in 15 months, but China was incensed when the Dalai Lama met with President Barack Obama in the U.S. last month.

Thousands of Tibetan exiles, most of them dressed in traditional silk and wool robes, gathered in the compound of a Buddhist temple to hear the Dalai Lama and other senior leaders of the Tibetan government-in-exile. The crowds included hundreds of Tibetan nuns and monks in orange and maroon robes.

The Dalai Lama, who fled Tibet shortly after the failed uprising, leads a government-in-exile from Dharmsala in India.

In Nepal, about 1,000 Tibetan exiles chanted anti-China slogans and waved Tibetan flags at a temple on the outskirts of Katmandu, the capital, as riot police deployed to keep protesters from marching in the streets.

"Stop killings in Tibet. We want a free Tibet," the demonstrators chanted. Police detained seven people at the temple for defying a ban on anti-China protests.

Separately, about 15 protesters who tried to break through heavy police lines and storm the Chinese Embassy visa office were stopped and detained by the police.

Waving Tibetan flags, these protesters ran toward the main entrance of the office located in the heart of Katmandu. They were quickly blocked the police and taken away in police vans to detention centers.