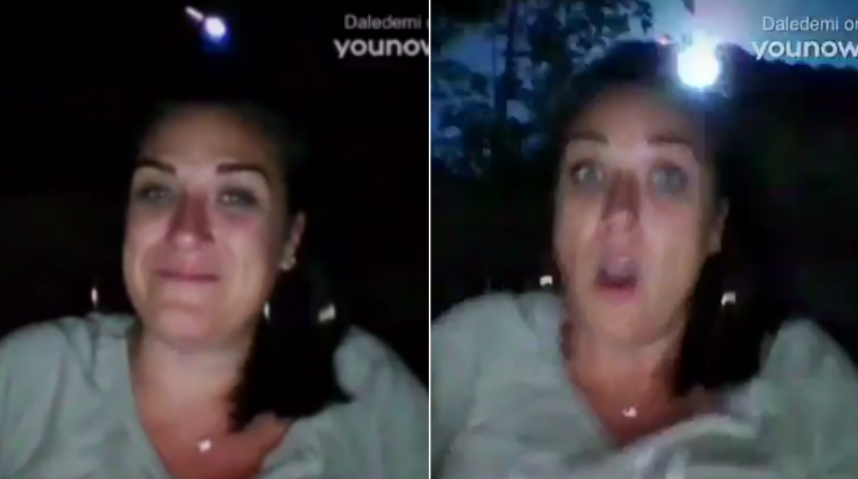 Hundreds of people witnessed a bright meteor flash across the sky in southern California Monday night. San Diego-area resident Dale Demi was one of them -- and both the fireball and her shocked reaction were caught on video.

Demi was live-streaming via YouNow in her backyard in Chula Vista, casually chatting about various dating sites with her dozens of followers, when she was “videobombed” by a bright green flash in the sky.

“Did you guys see that?!” a shaken Demi asked the 112 people who were watching the stream. The video of her reaction, first shared by viewer Faye Heddings on Twitter, was retweeted by more than 120 people.

Her followers certainly did, and they weren’t the only ones.

Demi, a former member of the U.S. military, said it’s unlike anything she’d ever seen before.

“I see this light. I thought it was coming towards me and I turn around to check it out,” Demi told CBS News. “It happened so fast. It was so bright.”

Minutes after the meteor lit up the sky, Demi said her small dog started barking uncontrollably. Several people watching her stream said they heard a “whoosh” and something similar to a sonic boom, but Demi only recalls seeing the blinding beam of light. Only seven witnesses heard either a concurrent or a delayed sound, AMS said.

Demi has watched the video of her reaction on repeat since it was posted online.

“I watched it over and over right away. I had to get the reality in my head that it was real,” she said. “I guess I was just at the right place at the right time.”