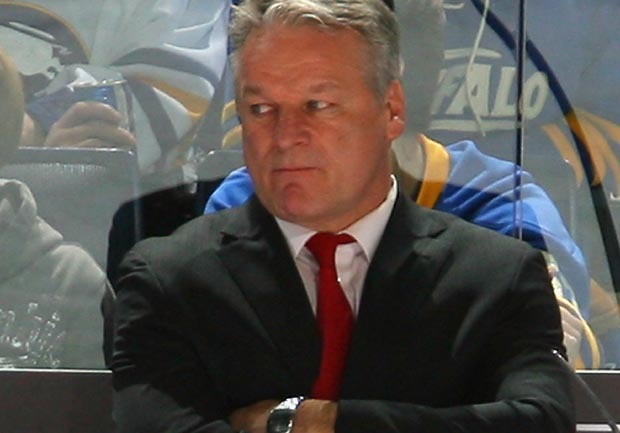 (CBS/AP) ARLINGTON, Va. - For quite some time, Washington Capitals general manager George McPhee tried to persuade former player Dale Hunter to return to the team as its coach. This season, McPhee finally got his man — just not for very long.

Hunter quit as Washington's coach on Monday after less than six months on the job, saying he wants to return to his family, his farm and the junior club he owns in Canada.

"It was the right thing to do," Hunter said.

He is the owner of the London Knights of the Ontario Hockey League, and he was the coach until McPhee beckoned in late November after firing Bruce Boudreau. Hunter's brother Mark took over as head coach of the Knights then, and one of Hunter's three children is an assistant. Hunter's 76-year-old father scouts for London; his sisters go to the games; another son lives nearby while attending college; his daughter is in the area, too.

Plus, Hunter and his brother own about 2,000 acres of farmland near his hometown of Petrolia, producing mainly wheat along with corn and soybeans.

"I'm going home," Hunter said at the Capitals' practice facility, a couple of hours after delivering the news to McPhee. "I've got a good thing going there with the family, so I'll stay home."

Hunter said he doesn't plan on returning to the NHL.

He was a successful forward in the league for 19 seasons — one of only four men whose jersey numbers were retired by the Capitals; the only player with 1,000 points and 3,000 penalty minutes in the NHL — but never won a Stanley Cup. Never before an assistant or head coach in the NHL, or even the AHL, Hunter was sought by McPhee in hopes he could bring his on-ice "tough guy" persona to a roster filled with stars more likely to make a pretty pass than drop to the ice to stop a puck.

McPhee doesn't have a specific timetable for finding a replacement, saying it might happen by the NHL draft in June or perhaps not until August.

Among the possible candidates to replace him, according to the Washington Post: Bob Hartley, Michel Therrien, Mike Keenan, Marc Crawford and Ron Wilson, who in 1998 led Washington to its only Stanley Cup finals appearance in franchise history.

Hunter met with McPhee on Monday morning, two days after the Capitals were eliminated from the playoffs in the Eastern Conference semifinals with a 2-1 loss to the New York Rangers in Game 7.

"We could have very easily won that series," McPhee said.

The GM said he didn't even attempt to change Hunter's mind, because "there's no gray in Dale's life."

"I'd rather have him for six months than not at all, because he had quite an impact on this club," McPhee said. "He really taught this club the `how' of how to win. They all wanted to win. They just didn't know how. The `how' is being a team and sacrificing, and he sure got that out of this club."

Hunter went 30-23-7 — a .500 record — in the regular season after agreeing to a one-year deal to take over for Boudreau, helping the Capitals squeeze into the playoffs. Playing a defense-first, possession-oriented system with an emphasis on blocking shots, Washington eliminated reigning Stanley Cup champion Boston in seven games in the first round.

"He got everything out of this team that he could," McPhee said.

Another key move by Hunter was limiting captain Alex Ovechkin's minutes, saying it was dictated by game situations and the opponent's line changes. But it was clear that Hunter wanted players to focus on preventing goals more than scoring them.

Used to playing more than 20 minutes a night, every night, Ovechkin wound up with a career-playoff-low 13½ minutes in one game, and also had only his second zero-shot postseason performance.

"For me, personally, it was pretty hard, to be honest with you," Ovechkin acknowledged Monday.

The two-time NHL MVP and team captain called it a "hard year, mentally."

Other players generally said they understood Hunter's motives for moving on — and generally expressed that they would have liked if he'd stuck around.

"I just had a little short chat with him and shook his hand and said thank you. I asked him if there's anything I can do to convince him to stay," forward Brooks Laich said. "He taught us as much about leadership and team aspects and respect amongst players and trusting your teammates as he did about hockey. He was like having another veteran in the locker room. He changed the culture around here a little bit, which the rest of us really enjoyed. He's leaving the team in a better state than he found it."

Whether Hunter's lessons will be followed when a new coach arrives remains to be seen.

"I know it's a long summer here, but hopefully guys remember that to win in the playoffs you have to sacrifice, block shots, do the right things," forward Troy Brouwer said. "That's just what he tried to instill in us the entire time he was here and the entire stretch down the playoffs."

Here's how Hunter summed it up: "You put skill with a hardworking, gritty team, and you've got a winner."

NOTES: G Tomas Vokoun said he won't be back. Injuries to him and Michal Neuvirth allowed Braden Holtby to become the starting goalie for all 14 playoff games. "I wasn't planning on being back here anyway. It was never my intention to be here more than a year," Vokoun said. ... F Jay Beagle broke his foot while blocking a shot in Game 5 against the Rangers and stayed in that game, but couldn't balance enough on the ice to play in Games 6 or 7 and needed surgery. He said he expects to be able to skate again within 2½ months. ... McPhee said D Tom Poti, who missed all season injured, "may have played his last game in the NHL." ... Among the team's unrestricted free agents: F Alexander Semin. Among the restricted free agents: D Mike Green. "I believe that we're going to win a Cup here," Green said, "and I want to be a part of it."