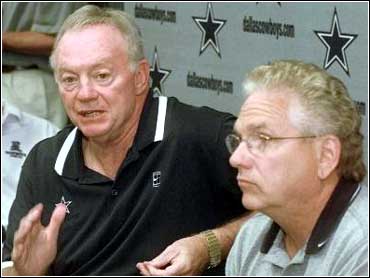 After a month of auditions for a third tight end, the Dallas Cowboys acquired O.J. Santiago from Atlanta on Sunday for two late-round draft picks.

A season-ending injury to Mike Lucky early in training camp left Dallas without a backup to David LaFleur and Jackie Harris. Lucky was to have joined LaFleur as a second blocking tight end on as much as 20 percent of the Cowboys' new offense.

Dallas' search included trading for one candidate, claiming another off waivers, signing three players and looking at another already on the roster.

The Cowboys were leaning toward keeping two - a blocker to back up and complement LaFleur and a receiver to back up Harris. Then the Falcons called Saturday and, after a few hours of negotiations, Dallas agreed to give up a fourth-round pick next year and a seventh-rounder in 2001.

"They'd been watching us bring in tight ends, so they saw we were potentially interested," Cowboys owner Jerry Jones said.

His most memorable contribution to the Falcons that year, however, may have been inventing the "Dirty Bird" dance that became their trademark.

Last season, Santiago had 15 catches for 174 yards. He'll be a free agent after this season.

To reach the 53-man roster limit, Dallas cut 18 players. Offensive lineman Tony Hutson and fullback Ryan Neufeld were the only members of last year's team to be released.