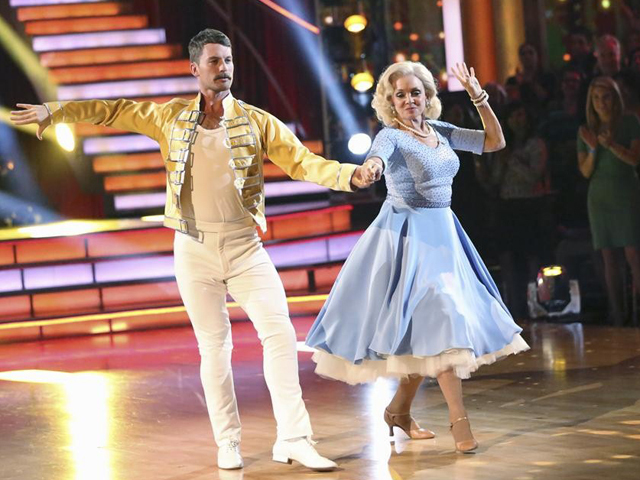 Not everyone can stay on "Dancing with the Stars" -- not even early fan favorites, as we learned last week with Bill Nye's departure.

On Monday, viewers said goodbye to another contender and saw the return of former "DWTS" pro-dancer champ Julianne Hough, who stepped in for judge Len Goodman. "Feel free to move Len's hemorrhoid pillow, if you want to," joked host Tom Bergeron at the start of the show.

Competition at the top got heated as "Glee" star Amber Riley overcame last week's knee injury, pulling out an impressive tango that garnered a score of 27 out of 30. "You were wonderful," judge Bruno Tonioli told Riley. But she wasn't the only lead scorer. Riley tied with two of her competitors, actress Elizabeth Berkley and actor/singer Corbin Bleu. Tonioli called Berkley a "bewitching fantasy creature."

Jack Osbourne, meanwhile, fell into the improvement category, with the judges concluding that Ozzy and Sharon Osbourne's son took it up a notch in week 4. He and his partner, Cheryl Burke, received 24 points.

Fighting off the flu, Nicole "Snooki" Polizzi put her best foot forward with a jive alongside pro-partner Sasha Farber. "You are the cutest thing in the world," said Hough. They also waltzed away with 24 points.

Valerie Harper and her partner, Tristan McManus, performed a Viennese waltz that landed them at the bottom of the heap with a score of 19. The actress, who was diagnosed with brain cancer earlier this year, said, "I am not at all ready to quit." Although judges praised her "beautiful" and "pretty" dance, the routine was filled with mistakes, resulting in Harper's elimination from the competition.

"It has been absolutely wonderful. Completely unique like nothing else in the world that you would ever do," said Harper upon hearing the news. "It was an opportunity for me to carry a message to folks. Not just with cancer or whatever they have."

Check out Monday night's scores below:

Tell us: What did you think about Harper's elimination?