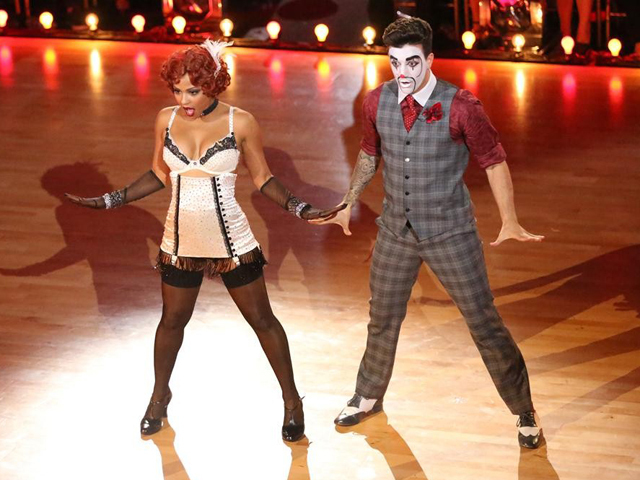 It was a "shock in the ballroom," according to "Dancing with the Stars" co-host Brooke Burke-Charvet.

During week five of the competition, another contender was sent packing -- a high-scoring one, too. Tom Bergeron clued viewers in at the start of the show, revealing that based on last week's votes, one of the four remaining female contestants would be getting the boot.

The episode got under way with a performance by singer Aloe Blacc and the pro troupe. Then it was time for the competition as stars battled in a round dubbed, "The Most Memorable Year" of their lives.

Corbin Bleu said 2011 was the most memorable as it was the year his sister was diagnosed with severe scoliosis. He danced the foxtrot and received praise from the judges, earning a total score of 28. Judge Len Goodman called the actor a "terrific dancer."

Also earning a score of 28 was Christina Milian, who said her most memorable year was in 2010, when she found out her child's father, The Dream, was cheating on herwith his assistant. That story is bound to get your blood flowing before hitting the dance floor.

Snooki, meanwhile, channeled the 2012 birth of her son, Lorenzo. "You should have known me before," she told her pro-partner Sasha Farber. "I drank all the time. I was loud, I was annoying. Still annoying now, but it's different." Oh we remember, Snooki. The new mom scored a 27 on Monday night.

A birth also influenced Jack Osbourne's dance. His most memorable year was 2012, when his daughter, Pearl, was born. It was also the same year,he learned he had multiple sclerosis. His routine earned a total score of 27. Bruno Tonioli called it "wonderful."

Brant Daugherty said 2009 was a turning point in his life as he danced to Elton John's "Your Song." The routine, which earned 27 points, received a standing ovation. Carrie Ann Inaba called it "breathtaking."

"Glee" star Amber Riley cited 2009 as her most memorable year. She had been rejected as a contestant on "American Idol," but managed to land a role on "Glee" "I want to show that just before you hit rock bottom, you can push it through," Riley said. She walked away with a 26.

Actress Elizabeth Berkley said last year was the most memorable, whenher baby Sky Cole Lauren was born. She also noted how 1989 was when she got her big break on "Saved by the Bell." Berkley received 26 points.

Bill Engvall dedicated his dance to his wife, Gail, whom he married in 1982. His performance to Billy Joel's "She's Always A Woman To Me" had a few hiccups, but the judges were impressed with the effort and emotion he poured into it. Engvall scored 24 points.

Leah Remini broke out a contemporary dance to Katy Perry's "Roar." The actress, who recently left the Church of Scientology, said 2012 was the most important year, saying, "You don't realize how not strong you really are until stuff hits the fan....You can either be a victim or do something about it."

It was an emotion-filled evening, but things got a bit more emotional for Milian when she learned at the end of the show that she was getting eliminated.

"It's a true shock, I wasn't expecting that, but we had I think the best performance tonight that we had thus far. I wouldn't want to leave on any other note but this way," Milian said.

"I'm just very proud of Christina, we worked really hard, she was great tonight. We went out with a bang," her partner Mark Ballas said.

Milian continued to focus on the positive, saying, "I've made some great memories, great friends here. Everybody's been fantastic. It's been something that I've learned a lot about myself just being here...If you take a challenge and you take a great risk, you become a better person."

Tell us: Where you surprised to see Milian go?

"Death threats, physical threats, intimidation - it's too much, it's not right," said one GOP elections official in Georgia.