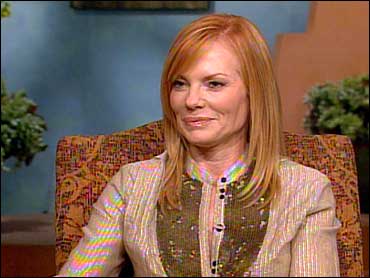 Marg Helgenberger and the rest of the "CSI: Crime Scene Investigation" cast is kicking off a two-part season premiere on the set of Cirque du Soleil in Las Vegas tonight. It's a story that ends up testing Helgenberger's character's strength in ways that the show never has before.

Helgenberger's character, Catherine Willows, who is usually accustomed to solving crimes, becomes a victim herself. She believes she was roofied — slipped a date rape drug — after she wakes up in a strange hotel room and makes herself a rape test kit.

"That propels my entire journey for part two, which will be next week," she told The Early Show's Julie Chen. "It allowed me to play lots of different emotions and nuances ... It falls under the category of being somewhat raw. It felt like I was in my own little noir movie set."

Helgenberger said she believes the seventh season of "CSI" is the best yet, even though it is facing some formidable competition from ABC, which has placed "Gray's Anatomy" against the hit CBS show.

"We are now two months into it, and I am shooting six episodes. The scripts are fantastic," she said. "Everybody has been kind of inspired. There's been talk about the fact that we now have stiffer competition on another network."

The medical dramadey "Gray's Anatomy" is very different than "CSI" Helgenberger said, and she thinks "there's enough people to go around for both."

Helgenberger, a former weather girl in Nebraska, also may be dealing with some romance this season. The premier features a scene when her character dances with George Eads, but Helgenberger insisted it is a purely platonic relationship.

"There might be sparks with someone else. I don't know who that might be, and it could be somebody that appeared out of nowhere in the next few episodes," she told Chen. "But, you know, I look forward to the opportunity because it's another way to show different sides of Catherine."

She did admit that her character and George Eads character had an intense make-out scene in a carwash left on the cutting room floor in the pilot.