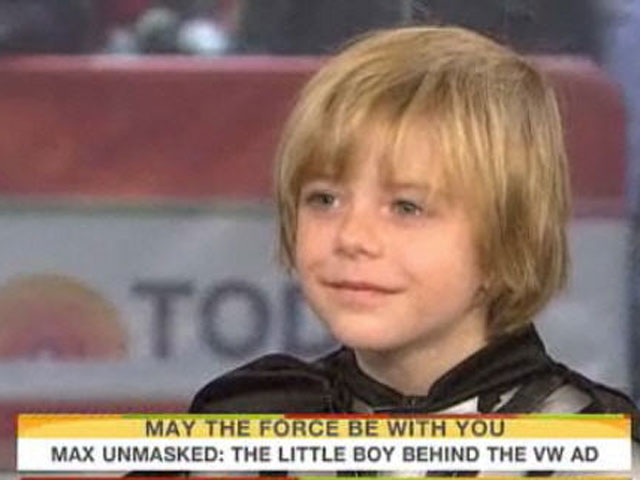 (CBS) The force seems to be with Max Page, the 6-year-old boy who appeared as Darth Vader in a commercial for Volkswagen.

Page appeared on the "Today" show Monday morning, after the commercial became the favorite of Sunday's Super Bowl ads.

The commercial, titled "The Force," has become a viral hit. It was YouTube's most-viewed video on Thursday and Friday (it was pre-released Wednesday) with more than  16 million views worldwide as of Monday afternoon. It was named most popular Super Bowl commercial on Hulu.com's "Ad Zone" and earned the No. 1 spot from BrandBowl.com, Adbowl.com and Mashable.com, according to the car company.

Page told Meredith Viera and Matt Lauer that he had never seen the "Star Wars" films before booking the spot, which is his first national commercial.

He has also done commercials for Walgreens and Clear Communications, his mother added, along with appearing on the soap opera "The Young and the Restless."

Entertainment Weekly points out that Page looks a lot like another "Star Wars" character - Mark Hamill, who played Luke Skywalker.

Was "The Force" your favorite Super Bowl commercial? Watch it again below and tell us your thoughts in the comments.