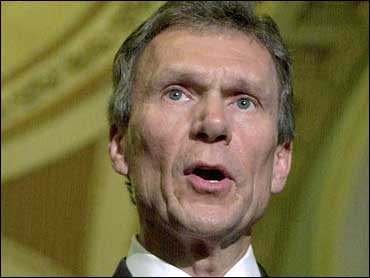 The Senate's top Democrat said Thursday that the failure of U.S. authorities to capture Osama bin Laden raises questions about "whether or not we are winning the war on terror."

Sen. Tom Daschle's remarks came as intelligence analysts concluded that a new audiotape almost certainly contained bin Laden's voice and is proof that he is alive.

"We can't find bin Laden, we haven't made real progress" in finding key elements of al Qaeda," the South Dakotan said. "They continue to be as great a threat today as they were one and a half years ago. So by what measure can we claim to be successful so far?"

President Bush bristled Wednesday when asked if bin Laden, blamed for the Sept. 11 attacks, should have been captured sooner by U.S. and coalition forces. "We're making great progress in the war on terror. Slowly, but surely, we are dismantling the terrorist network," he said.

Daschle, meeting with reporters, said authorities should do a better job of finding where bin Laden's message came from.

A technical analysis of the tape was still under way Thursday, and officials said they still think that it was bin Laden's voice but they have not confirmed that.

Lawmakers and the Bush administration are worried that the new tape is a signal that more terror strikes are imminent.

"He's alive. We have to work on that assumption, and we are," said a senior law enforcement official, speaking on condition of anonymity Wednesday.

Other U.S. officials were more conservative, saying they believe it probably came from bin Laden. They left open the possibility, however slight, that it is a hoax.

But all said they were treating the tape as a real message from al Qaeda's missing leader, even as the CIA and National Security Agency conducted a technical analysis of the tape aimed at further authenticating it.

"They can't get to 100 percent certainty, but they're sure," the official said. The official, who participated in a high-level briefing by CIA and NSA officials, said analysts were trying to determine whether bin Laden placed cryptic messages in the recording to order followers into action.

Homeland security director Tom Ridge, during an appearance before a State Department gathering Thursday, referred to "bin Laden's remarks over the past 24 to 48 hours." It was an offhanded remark, and it was not clear whether he was speaking on the basis of information not yet made public.

Later, Ridge spokesman Gordon Johndroe said he did not believe the homeland security director was attempting to confirm that the voice on the tape that of bin Laden. Johndroe did say, nonetheless, that the administration is concerned about the message on the tape.

Bush said he was taking the taped message "very seriously."

"Whoever put the tape out has put the world on notice yet again that we're at war," the president said Wednesday after a Cabinet meeting at the White House.

The tape appears to be the first confirmation in a year that bin Laden is alive.

The speaker on the tape sounds undeterred by the loss of bin Laden's home in what was Taliban-ruled Afghanistan or by the death and capture of several of his closest lieutenants.

Attorney General John Ashcroft said special attention is being paid to "what might be signaled" on the tape, while FBI Director Robert Mueller said the existence of the tape "does and should put us on greater alert."

"There may be individuals in the United States we do not know about who could commit attacks," Mueller said.

Though bin Laden tops the Pentagon's wanted list in the war on terrorism, defense officials sought to play down the importance of the tape, saying it won't change how they conduct the war.

"We've said all along that this is not about one person," said Lt. Col. Dave Lapan, a Defense Department spokesman. "We've always said that if bin Laden were dead today it would not change what we do. Likewise if he is alive, it does not change what we do because our goal is to find and destroy terrorism ... everywhere."

Counterterrorism officials have said that if bin Laden is alive, they believe he is probably in a remote, mountainous area of Pakistan along the country's border with Afghanistan. American officials have never confirmed rumors that bin Laden was wounded or suffering some kind of kidney ailment.

Tens of thousands of U.S., British, Canadian, Australian, Danish and other forces have worked in the region around Afghanistan over the last year — searching by land, air and sea for al Qaeda and former Taliban rulers who scattered in the first few months after the Afghan bombing campaign began last fall.

Across patches of Afghanistan, special operations forces from several nations have secretly spied in villages and mountain passes that could be possible hideouts.

Troops collected and analyzed heaps of documents, computer disks and other evidence left by enemy fighters in caves and underground bunkers. They monitored satellite imagery and intercepted radio, telephone and e-mail communications.

Unmanned spy planes equipped with cameras and Predator drones fitted with Hellfire missiles have been used by CIA operatives. In one instance, they killed a tall man gathered with others under a tree. DNA analysis of his remains later showed that it was not the 6-foot-4-inch (1.9-meter) bin Laden, officials said.

Those who really know where bin Laden is apparently aren't saying, despite promises of big money. The United States has offered a $25 million reward for information to help capture him.

Some intelligence officials complain that the best chance to catch bin Laden was lost last December, when he was believed hiding at his Tora Bora stronghold during U.S.-led airstrikes but escaped because too few American troops were committed to the hunt

Defense Secretary Donald H. Rumsfeld denied such an error was made and said in April that despite numerous tips, rumor and other intelligence, the U.S. military simply had never had the "actionable intelligence" — enough good and timely information on bin Laden's whereabouts — to mount a mission to go after him.

Defense officials said Wednesday it remains true to this day.