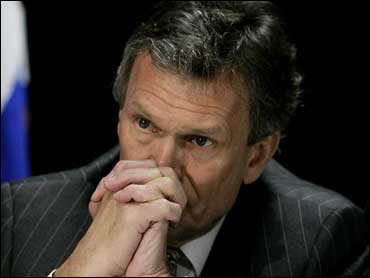 The use of warrantless wiretaps on American citizens was never discussed when Congress authorized the White House to use force against al Qaeda after the Sept. 11 attacks, says former Senate Majority Leader Tom Daschle.

In an article printed Friday on the op-ed page of The Washington Post, Daschle also wrote that Congress explicitly denied a White House request for war-making authority in the United States.

"This last-minute change would have given the president broad authority to exercise expansive powers not just overseas ... but right here in the United States, potentially against American citizens," Daschle wrote.

"The Bush administration now argues those powers were inherently contained in the resolution adopted by Congress — but at the time, the administration clearly felt they weren't or it wouldn't have tried to insert the additional language," the South Dakota Democrat wrote.

Daschle was Senate Democratic leader at the time of the Sept. 11, 2001, terrorist attacks on New York City and Washington. He is now a fellow at the Center for American Progress, a liberal Washington think tank.

The administration formally defended its domestic spying program in a letter to Congress late Thursday, saying the nation's security outweighs privacy concerns of individuals who are monitored.

In a letter to the chairs of the House and Senate intelligence committees, the Justice Department said President Bush authorized electronic surveillance without first obtaining a warrant in an effort to thwart terrorist acts against the United States.

"There is undeniably an important and legitimate privacy interest at stake with respect to the activities described by the president," wrote Assistant Attorney General William E. Moschella. "That must be balanced, however, against the government's compelling interest in the security of the nation."

Mr. Bush has acknowledged he authorized such surveillance and repeatedly has defended it in recent days.

But Moschella's letter was the administration's first public notice to Congress about the program in which electronic surveillance was conducted without the approval of a secret court created to examine requests for wiretaps and searches in the most sensitive terrorism and espionage cases.

Moschella maintained that Mr. Bush acted legally when he authorized the National Security Agency to go around the court to conduct electronic surveillance of international communications into and out of the United States by suspects tied to al Qaeda or its affiliates.

CBS News correspondent Jim Stewart reports that, in addition to questions about the legality of the program, another question certain to be asked by Congress is what the secret surveillance accomplished.

So far the White House has

offered only one conflicting example (video)
, Stewart reports. That was the case of Iyman Faris, an Ohio truck driver and naturalized U.S. citizen, who pleaded guilty in 2003 to supporting Al Qaeda by planning to cut down the Brooklyn bridge with a blowtorch. The NSA spy program was necessary because it "helped uncover" the Faris plot, the White House told The New York Times, which broke the surveillance story. But last summer the president gave credit for the Faris case to the Patriot Act, which does require court approval for wiretaps.
Former CIA Director Jim Woolsey said Friday the decision to undertake the monitoring is a "very tough and a very close call," but he comes out on the president's side.

"This is one where I think if anyone says it's a crystal-clear issue one way or another, that is the only position I regard as wrong," Woolsey said. "There are real values on both sides — privacy vs. security."

Yet Woolsey said the White House's argument that it was authorized to do this under Congress' joint resolution days after 9/11 is weak, and the president has to rely on his inherent power under Article II of the Constitution.

Because of threats from group's like al Qaeda and Hezbollah, he said, "we are going to have to take some steps in the war on terror that we did not have to take in the Cold War."

In his letter, Moschella relied on the Sept. 18, 2001, congressional resolution, known as the Authorization to Use Military Force, as primary legal justification for Mr. Bush's creation of a domestic spying program. The resolution "clearly contemplates action within the United States," Moschella wrote, and acknowledges Mr. Bush's power to prevent terrorism against the United States.

Congress adopted the resolution in the chaotic days after the Sept. 11, 2001, terrorist attacks, authorizing the president to wage war against al Qaeda and other terrorist groups that pose a threat to the United States.

Moschella said the president's constitutional authority also includes power to order warrantless foreign intelligence surveillance inside the United States. He said that power has been affirmed by federal courts, including the secret Foreign Intelligence Surveillance Act court. The FISA court was created in 1978 after public outcry over government spying on anti-war and civil rights protesters.

The administration deliberately bypassed the FISA court, which requires the government to provide evidence that a terrorism or espionage suspect is "an agent of a foreign power."

Moschella said Mr. Bush's action was legal because the foreign intelligence law provides a "broad" exception if the spying is authorized by another statute. In this case, he said, Congress' authorization provided such authority.

He also maintained the NSA program is "consistent" with the Fourth Amendment — which prohibits unreasonable searches and seizures — and civil liberties.

For searches to be reasonable under law, a warrant is needed, Moschella said. But, outside criminal investigations, he said, the Supreme Court has created exceptions where warrants are not needed.