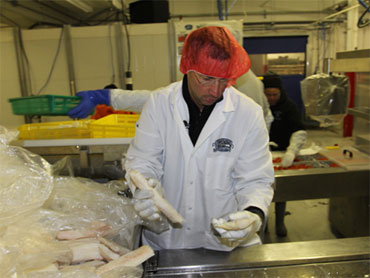 On Friday, "Early Show" Weather Anchor Dave Price began what will no doubt be an arduous journey. He started in Anchorage, Alaska, with only $50 in his pocket. His goal is to somehow work his way back to New York by the end of the week.

Anchorage is the northernmost major city in America. Rugged and frigid, Dave pointed out, it would have been hard to pick a starting point that felt more remote.

However, Dave added on "The Early Show" Monday, he received a warm reception in the very cold place, "although it seemed that the odds were stacked against me."

Dave began his trip more than 4,300 miles away from home in New York City. He has had to be dependent on the kindness of strangers to get him back.
Jessica Peterson, for instance, offered Dave his first ride.

She told Dave, "There's so many nice people here, all you have to do is flash your pearly whites and I think people will take sympathy on you."

With only $50 dollars in his pocket, Dave recalled his first order of business was to earn some money.

He started at the Copper River Seafoods plant in Anchorage, processing and packaging Alaskan cod and other Pacific fish.

As word of his willingness to work spread, job offers poured in. Soon he was changing tires, shoveling snow, and driving Alaska's version of a dream machine -- the Zamboni at the University of Alaska Anchorage.

Dave also earned some cash and some breakfast at Anchorage's Kaladi Brothers Coffee.

Then, an airborne ambulance company e-mailed Dave. They had an open seat on a flight to Washington State, but it required an overnight pit stop in Fairbanks. It was the wrong way, but Dave had no other options.

Air ambulances are used frequently in Alaska, Dave explained. For some, he said, it's the only way to get medical care.

Kelli Irwin, chief flight nurse for Guardian Flight, invests personally with everyone who boards her aircraft.

Irwin told Dave, "For me, my goal is to treat every patient the way I'd want my friends and family to be treated."

Dave said, "Although I wasn't a patient, I felt that same type of care. Nonetheless, I had to pay for it, by unloading 300 pounds of medical cargo."

When Dave arrived in Fairbanks, he landed a job at Chena Hot Springs, a remote resort 60 miles outside downtown Fairbanks.

Bernie Karl put Dave to work. He chopped wood and even carved martini glasses out of ice for their ice hotel.

The ice museum at the resort features an amazing collection of ice sculptures, an ice bar and chandeliers made of individually-carved ice crystals. The resort gives all of their employees room and board for the night.

Then Karl showed Dave where he would be sleeping -- a room that stays at 20 degrees all night.

Dave asked Karl, "Can you sleep in a 20 degree room like this?"

In the morning, it was time to defrost and head south.

Stay tuned for more of Dave's trip. You can follow every step of the "No Way Home" journey here. And, if Dave's going through your area, you can also help him via his Twitter account with offers of food, work or shelter @earlyshowdave, or e-mail him at nowayhome@cbsnews.com.