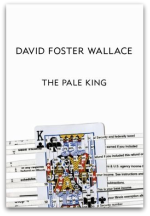 Now that your taxes are (presumably) done, take a break and read an excerpt from David Foster Wallace's riff on life and the limits of human boredom at a tax processing center in Peoria, Illinois. Wallace's new, posthumously published novel, The Pale King, hit bookshelves on—when else?—April 15. Here's an excerpt that describes an orientation video for new examiners:

‘The Internal Revenue Service is the branch of the United States Treasury Department charged with the timely collection of all federal taxes due under current statute. With over one hundred thousand employees in more than one thousand national, regional, district, and local offices, your IRS is the largest law enforcement agency in the nation. But it is more. In the body politic of the United States of America, many have likened your IRS to the nation’s beating heart, receiving and distributing the resources which allow your federal government to operate effectively in the service and defense of all Americans.’ Shots of highway crews, Congress as seen from the Capitol’s gallery, a porch’s mailman laughing about something with a homeowner, a contextless helicopter with the archive code still in the lower right corner, a Welfare clerk smiling as she hands a check to a black woman in a wheelchair, a highway crew with their hardhats raised in greeting, a VA rehab center, & c. ‘The heart, too, of these United States as a team, each income earner chipping in to share resources and embody the principles that make our nation great.’ One of the prebriefers’ cards directs her here to lean in and insert that the voiceover script is a working draft and that the final product’s voiceover will have real human inflections—to use their imagination.‘The lifeblood of this heart: the men and women of today’s IRS.’ Now a number of shots of what may be real but unusually attractive Service employees, mainly GS-9s and -11s in ties and shirtsleeves, shaking hands with taxpayers, bent smiling over the books of an auditee, beaming in front of a Honeywell 4C3000 that is in fact an empty chassis. ‘Far from faceless bureaucrats, these [inaudible] men and women of today’s IRS are citizens, taxpayers, parents, neighbors, and members of their community, all charged with a sacred task: to keep the lifeblood of government healthy and circulating.’ A group still of what’s either an Exams or Audit team arranged not by grade but by height, all waving. A shot of the same incised seal and motto that flank the REC’s north facade. ‘Just like the nation’s E pluribus unum, our Service’s founding motto, Alicui tamen faciendum est, says it all— this difficult, complex task must be performed, and it is your IRS who roll up their sleeves and do it.’ It’s laughably bad, hence its intrinsic plausibility to the wigglers, including of course the failure to translate the motto for an audience of TPs who all too often actually misspell their names on returns, which the Service Center systems catch and kick over to Exams, wasting everyone’s time. But are presumed to know classical Latin, it seems.