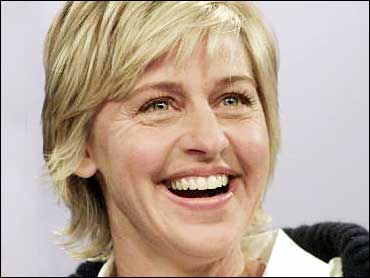 Ellen DeGeneres' new talk show was nominated for 12 Daytime Emmy Awards on Thursday, and "The Young and the Restless" led the soap opera pack with 16 nods.

"All My Children" and "As the World Turns" earned 14 nominations apiece, with "General Hospital" and "Guiding Light" joining DeGeneres with 12 nominations each.

The 31st annual Daytime Emmy Awards are set for May 21 at New York's Radio City Music Hall, telecast on NBC.

In what has to be bittersweet, Wayne Brady earned nominations for best talk show and best talk show host - both awards he won in 2003. His show, however, hasn't been renewed for a third year and will cease production this spring.

Vieira was also nominated for best game show host for "Who Wants to Be a Millionaire," and will compete against veterans Bob Barker of "The Price is Right" and Alex Trebek of "Jeopardy!"

Last year's winner as best actor in a daytime drama, Maurice Benard of "General Hospital," will compete against cast mate Anthony Geary this year. Other best actor nominees were Roger Howarth of "As the World Turns," Grant Aleksander of "Guiding Light," Thorsten Kaye of "Port Charles" and Eric Braeden of "The Young and the Restless."

Two other "General Hospital" cast members, Nancy Lee Grahn and Tamara Braun, will compete for best actress. Maura West of "As the World Turns," Kim Zimmer of "Guiding Light" and Michelle Stafford of "The Young and the Restless" were also nominated.

Among the missing were Susan Flannery of "The Bold and the Beautiful," who has won three of the past four years, and the frequently nominated Susan Lucci.

"As the World Turns," "The Bold and the Beautiful," "Guiding Light" "General Hospital" and "The Young and the Restless" were nominated for best daytime drama.

Martha Stewart, who could use some good news as she awaits the jury verdict in her insider trading trial, was nominated as best service show host for "Martha Stewart Living."

The late John Ritter, the voice of "Clifford the Big Red Dog," was nominated for outstanding performer in an animated program. Among his competitors: veteran newsman Walter Cronkite, who's the voice of Benjamin Franklin in PBS' "Liberty's Kids."