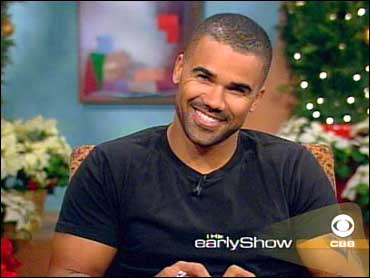 The hit CBS drama Criminal Minds is one of the most popular new dramas in primetime. One of its stars is former daytime actor Shemar Moore.

Moore plays Derek Morgan, an agent in the elite FBI team that profiles the country's most twisted criminal minds. He tells The Early Show's Rene Syler that his role is a big change for those used to seeing him as Malcolm Winters on CBS' The Young and the Restless.

"I walk through the mall and the airports and they go, 'OK, you're doing that serious, nasty crime show. When is Malcolm coming back?' I get that all the time," Moore said. "It's a chance for me to do primetime — something a little more serious and a little more sophisticated, and it's fun. I'm sharing the stage with people who need no introduction."

His co-stars include Mandy Patinkin and Thomas Gibson. The fact that the show is a hit is "job security," said Moore. "I'm tired of hustling, tired of eating Ramen. Lord, my college days are long behind me."

Moore says he is trying to move to New York City.

"I love the rhythm out here. I've got family in Boston. It would get me closer to them," he said. "The food. I've only been here three days doing press and things like that. I've had better food in three days than I have had in two years. I don't cook. It's not happening. You know me."

Moore says "Criminal Minds" is different from other crime dramas on TV.

"I really want to hit on that," he said. "When I first got into the show, I'll be honest, I was like, OK — CBS does 'CSI.' What's going to make us different? People who haven't seen the show are probably thinking, 'Oh, Lord, another crime show.' But this show, through the team of seven, will take you for a walk into the mindset of these bad guys. But what's interesting is it's not just bad, bad, bad and here come the superheroes to save the day and catch the bad guy. We give you a compassionate look at how these people got to that place of doing the crime.

"They didn't start out bad. They were just like us. We all started out even keel, but something happened along the way to make them flip to get to this place so they commit this crime. You actually feel sorry for these criminals as you understand who they are."

Co-star Thomas Gibson has said that when the show is being shot, female fans go crazy for Moore, screaming his name.

"Yeah, whatever, OK," he said. "No. There are no women on set. Aside from a few extras and Lola and A.J. and Kiersten, the computer geek."

Will fans be seeing Moore back on daytime?

"You know, 'The Young and the Restless' was the greatest thing that ever happened to me," he said. "Without 'The Young and the Restless,' I wouldn't have the career I had and I wouldn't be on 'Criminal Minds.' My hours are ridiculous. I don't know when I would have time. Technically, Malcolm walked out the door. He's not dead. They didn't kill him."

In soap opera land, that means he could always come back.

"That's right," he said. "Nobody else is playing the role."