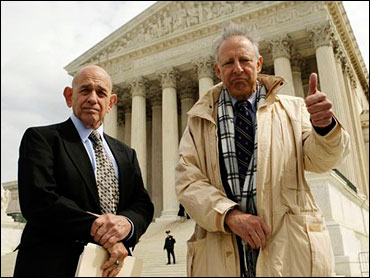 (AP Photo/Pablo Martinez Monsivais)
The city of Washington, D.C. is mounting an aggressive legal defense of its ban on carrying handguns, calling it "squarely in the mainstream and eminently reasonable."

In a 37-page legal brief filed this week, the District of Columbia says that refusing to grant licenses to its residents to carry handguns in public complies with the Second Amendment. The regulations "serve important goals of public safety, especially here, in the nation's capital," the brief says.

If this lawsuit sounds a little familiar, you're right. It was in June 2008 that the U.S. Supreme Court shot down a city ordinance effectively preventing law-abiding residents from possessing firearms for self-defense inside their own homes. (See the nearby photograph of plaintiff Dick Heller, right, and his attorney Robert Levy.)

The text of the Second Amendment says that "the right of the people to keep and bear arms, shall not be infringed." Last year's D.C. v. Heller case dealt with the right to keep arms, but what about the second half: the right to bear arms?

That's what the Second Amendment Foundation is hoping to clear up in a lawsuit the non-profit group filed against the District last month.

The city's response filed on Wednesday says the case should be tossed out of court by granting its motion for summary judgement. Here are some excerpts:

Plaintiffs' invocation of various snippets of language from Heller -- that "the right to keep and carry arms" authorizes the public carrying of weapons -- is not supported by that decision, or any other controlling decision. Plaintiffs rely almost exclusively on legal treatises or inapposite, outdated decisions from other jurisdictions."

Plaintiffs provide no controlling or persuasive authority for their conclusion that the right to bear arms universally encompasses the right to carry handguns in public; for over a century and a half, it has been illegal to do so in the nation's capital. Such longstanding law and policy cannot be overturned on the basis of plaintiffs' flimsy showing.

The District is not alone in prohibiting the registration of firearms by non-residents, and declining to issue "carry" licenses, or recognize such licenses from other jurisdictions. The Second Amendment does not "guarante[e] the right to carry handguns in public for self-defense", nor are the District's (and Congress') policy choices here as far outside the mainstream as plaintiffs' [sic] argue.

The Supreme Court recognized the power of government to ban the carrying of weapons in "sensitive places." ... Defendants aver that the whole of the District of Columbia should be considered a "sensitive" place, given its dense concentration of iconic structures, government facilities, embassies, and regular meetings of diplomats and leaders from around the world... Prohibiting the carrying of weapons in public, and restricting registration of handguns to District residents, serve important goals of public safety, especially here, in the nation's capital. The District need not observe the lowest common denominator of gun control among the various states. For the foregoing reasons, defendants move for summary judgment.

The District's city code says nobody may carry "either openly or concealed on or about their person, a pistol, without a license." But a post-Heller law that took effect early this year appears to have curbed the ability of the police chief to grant those licenses.

For their part, the Second Amendment Foundation and the group's attorney, Alexandria, Va.-based Alan Gura, are not arguing that all licenses-to-carry schemes are unconstitutional (something that one D.C.-area court would reject anyway). Rather, they're saying that a complete ban on open and concealed carry licenses is necessarily unconstitutional.

"We're not against all gun laws or forms of gun control here," the Second Amendment Foundation's Alan Gottlieb told me last month. "We're not saying that you can bring your gun to the Capitol building or the White House. But there are obviously places where you should be able to carry a gun for self-defense."

Now, there may be some problems with the District's argument. One is a simple factual error: Deputy Attorney General George Valentine's brief claims that "the majority of Americans live in states that entirely prohibit the carrying of concealed weapons."

Perhaps it was an editing mistake, but in any case, that statement is untrue. Only two states, Wisconsin and Illinois, completely prohibit carrying concealed weapons. Even states like California and New York, not known to be especially gun-friendly, permit concealed carry licenses to be granted (even if it's difficult to obtain one in practice).

The other problem with the District's argument is that, if the Second Amendment does protects an individual right, the right to "bear arms" has to mean something more than walking around your house with a .40 caliber Glock in a belt holster.

In last year's Heller case, the justices' majority opinion noted that "at the time of the founding, as now, to 'bear' meant to 'carry,'" and that the phrase "'bear arms' was unambiguously used to refer to the carrying of weapons outside of an organized militia." Also: "We find that (the Second Amendment's clauses) guarantee the individual right to possess and carry weapons in case of confrontation.""

That seems reasonably clear. But because the city of Washington, D.C. sees it otherwise, its handgun laws may end up back at the Supreme Court soon enough.