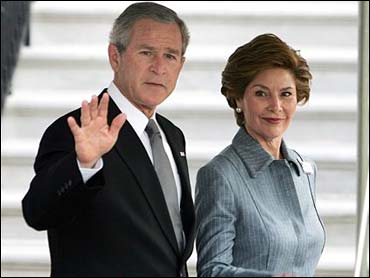 Former Presidents Bush and Clinton will accompany President Bush to the funeral of Pope John Paul II, the White House said Tuesday. Secretary of State Condoleezza Rice will also be part of the small official U.S. delegation, but former Presidents Carter and Ford will not.

The president and his wife, Laura, will lead the group representing the United States at the funeral on Friday, said White House press secretary Scott McClellan.

A spokesman at The Carter Center in Atlanta, Jon Moore, said Mr. Carter — relishing the memories of two visits as president with the pontiff — had told the White House he wanted to go to the funeral. But after learning that the Vatican is limiting the U.S. delegation to five people and that "there were also others who were eager to attend," Mr. Carter was "quite willing" to withdraw his request, said Moore.

"He and his wife Rosalynn are very pleased with the official delegation," Moore said of Carter.

Former President Ford, who lives in California, is 91 and no longer travels extensively.

President Bush talked about the pope at both his public appearances Tuesday, during a Social Security speech in Parkersburg, W.Va., and later after a Cabinet meeting at the White House.

"What a great man," said Mr. Bush. "It will be my honor to represent our country at a ceremony marking a remarkable life — a person who stood for freedom and human dignity."

Clinton spokesman Jim Kennedy said the former president's doctors have given him clearance to fly to Rome. Mr. Clinton had surgery a month ago in New York to deal with a rare complication from a heart bypass operation six months earlier. His doctors originally told him he would need four to six weeks at home, but he traveled by train to Washington last week to collect an award for his work on AIDS.

President Bush is leaving Washington for Rome on Wednesday, and is to spend Thursday meeting with Italian Premier Silvio Berlusconi and Italian President Carlo Azeglio Ciampi. The president plans to leave Italy Friday, immediately after the funeral, to spend the weekend at his ranch in Texas.

Mr. Bush will be the first sitting president to attend a pope's funeral. The pontiff died on Saturday, ending more than a quarter-century as leader of the world's Roman Catholics.

Mr. Bush has met with the pope three times during his presidency. The pontiff was quick to tell the U.S. president about his deep disagreement with the war in Iraq, the abuse of Iraqi prisoners by U.S. troops and Mr. Bush's support for the death penalty. During their final meeting last June, Mr. Bush presented the pope with the Medal of Freedom and the pope responded by reading a statement that said he had "grave concern" about events in Iraq.

Some of Congress' most well-known Catholics will attend the funeral Friday of Pope John Paul II, though not as part of the official U.S. delegation.

Among them are Sens. Rick Santorum, R-Pa., and Edward M. Kennedy, D-Mass., and House Democratic Leader Nancy Pelosi of California.

The Senate delegation of 14 will be led by Majority Leader Bill Frist, R-Tenn. Speaker Dennis Hastert, R-Ill., will lead a House delegation of about two dozen members. Congress will be out of session Thursday and Friday.

Congress' version of an impromptu road trip began even before John Paul died Saturday. Members began lobbying their leaders on Friday for seats in the delegation, aides said.

CBS' Gloria Borger reports some members of Congress are prepared to sleep in a monastery or other improvised lodgings.

Arrangements remained mired in confusion Tuesday even as members prepared for departures beginning Wednesday night. Hotel rooms are scarce in Rome, which could result in U.S. lawmakers spending the night Thursday at the American embassy, a monastery, distant hotels or the seats of the plane, Republican and Democratic aides said.

Dodd recalled his first meeting with the pope in St. Peter's Square in 1983, when he delivered a message to the pontiff from Polish Solidarity leader Lech Walesa.

"Lech Walesa wanted to know if his Solidarity movement was overusing the church," said Dodd. He said the pope's answer was no, he was not concerned that Solidarity often used churches as meeting places.

"He was already sowing the seeds for the critical role he played in that," Dodd said.