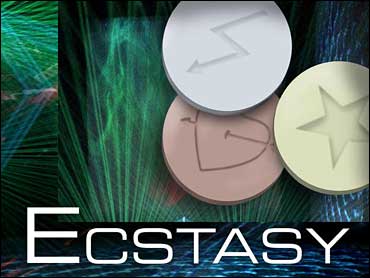 Calling Ecstasy "the Y generation's cocaine," the head of the Drug Enforcement Administration pledged to double the number of club-drug investigations by federal authorities.

The DEA — which employs the grim reaper on the logo of its anti-Ecstasy campaign — says about 5 percent of its major investigations involve club drugs. Asa Hutchinson, head of the agency, said that would double under "Operation X-Out."

"The explosive use of Ecstasy and predatory drugs among our youth is fast reaching epidemic levels," said Hutchinson, who detailed the initiative at a Thursday night news conference.

He said the agency plans to focus new efforts on Internet trafficking and in the Netherlands, where some 80 percent of the world's supply originates. Domestically, the DEA will also step up enforcement in south Florida, the main entry point for the drug, as well as enhance interdiction efforts at major U.S. airports.

Hutchinson held up an evidence bag containing powdered Ecstasy that was confiscated in a Wednesday night raid.

Six people were arrested on drug charges and eight pounds of high quality Ecstasy were seized. The drug, with an estimated street value of $1.25 million, was found in powder form instead of the commonly seized pills imported from Europe, adding to growing fears that Ecstasy is increasingly being produced within the United States, Hutchinson said.

Nationwide, hospital emergency room cases involving Ecstasy rose to 5,542 last year, up from 637 in 1997, according to the Drug Abuse Warning Network.

Ecstasy, also known as MDMA, is a synthetic drug considered part hallucinogen and part amphetamine that has been linked to brain, heart and kidney damage. It became popular over the past decade at dance parties known as raves for the energy and euphoria it gives users.

According to the DEA web site, its street names include "XTC, go, X, Adam," and "hug drug1." The agency uses the slogan "dancing with darkness" when discussing its efforts against club drugs.

Hutchinson also said there was a rise in the use of so-called "date-rape" drugs such as GHB, or gamma hydroxybutyrate, and Rohypnol.

In September, as part of Operation Webslinger, authorities broke up four Internet drug-trafficking rings operating in the United States and Canada, making more than 100 arrests and seizing enough chemicals for 25 million doses of GHB and similar substances.

Judi Clark, the mother of 15-year-old Samantha Reid, who died in 1999 from an overdose of GHB slipped into her soda, said at the news conference that teenagers underestimate the drug's power.

"Many kids across the United States who are experimenting with drugs, slipping them into other people's drinks, are under the false impression that you can put them in a corner and they'll wake up," she said, "Samantha didn't wake up."