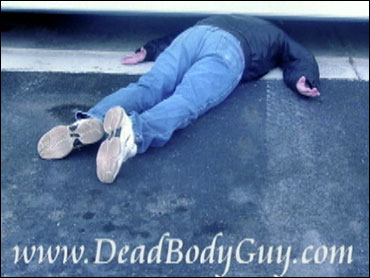 Chuck Lamb always wanted to be an actor. But, when he realized his dreams weren't likely to pan out, the Columbus, Ohio computer programmer decided to use the Internet to try to make his mark.

Early last month, Lamb started deadbodyguy.com, on which he poses as if he's dead, in a number of settings, from falling down stairs, to being crushed by the garage door.

His wife, Tonya, takes the pictures.

The site has taken on a life of its own.

He says it hit him that, at 47, with six kids, a paunch, pale skin, and an almost bald head, acting probably wasn't in the cards for him.

"It's always been somebody's dream to be in the movies or on a TV show," he told Syler. "This is part of it right here. It's really hitting. It's just wonderful.

"We come up with the idea because I raised children, you know, had a good marriage. I've done about everything I've wanted to do. And it's just — I'm going to do it. If I set my mind to do something — I can't swim, and we learned scuba diving.

"I know there's no way I could go to Hollywood and say, 'Hi, I'm Chuck Lamb. I'm old and bald and have no acting experience. Can I be in a movie?' I knew they were going to go, 'Next.' It came in a dream. And I told Tonya, anybody can lay down. Anybody can lay down and hold their breath."

Tonya says she was on board from the get-go. She not only takes the pictures, she prepares fake blood for them, out of food coloring and corn syrup.

"What other woman gets to kill her husband off three times a week?" Chuck asks.

"I hear your boss is wonderful," Syler kidded back.

Chuck says his kids are all "really right behind me. They know their dad's a little unconventional, let's say."

"This isn't my first stunt," he added. "This is all about — it's supposed to be light humor. It's supposed to be fun. I'm the guy that's walking next to you on the street asking for an autograph. I'm the average, everyday underdog and I want everyone to know we can do this, together, all of us. Never quit living your dream."