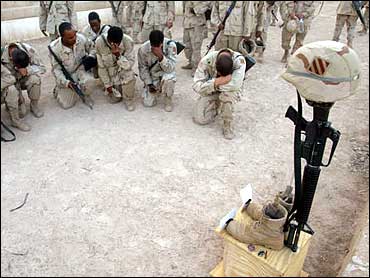 Iraq's daily barrage of attacks killed two more American soldiers and an Iraqi employee of a U.N.-affiliated relief agency Sunday, while thousands of followers of a hardline Shiite Muslim cleric staged an anti-American protest in the holy city of Najaf.

Also, the top commander of American and international troops in Iraq said Sunday he is establishing an Iraqi "civil defense force," or armed militia, of about 6,800 men to help American forces combat the violence and sabotage that he and others believe is being spearheaded by remnants of Saddam Hussein's regime.

Gen. John Abizaid, the commander of U.S. Central Command, said he will establish eight battalions of armed Iraqi militiamen, each with about 850 men. They will be trained by conventional U.S. forces — a job usually handled by American special operations forces — and are expected to be ready to begin operating within 45 days, he said.

The two U.S. soldiers died when rocket-propelled grenades and small-arms fire struck their convoy early Sunday near Tal Afar, a town west of the northern city of Mosul, said military spokesman Cpl. Todd Pruden. Another soldier was injured. All the victims were from the 101st Airborne Division.

The deaths brought to 151 the number of U.S. troops killed in action since the March 20 start of war — four more than during the 1991 Gulf War. Also Sunday, a U.S. soldier was killed and two others injured when their vehicle crashed and flipped over near Baghdad International Airport, according to a statement from U.S. Central Command in Tampa, Fla.

The area of the convoy attack near Tal Afar, 240 miles northwest of Baghdad, had been relatively peaceful in recent weeks, and the ambush was a worrying development for American forces trying to bring stability to Iraq.

Most recent violence has occurred in an area north and west of Baghdad called the Sunni triangle, where some support for Saddam remains. Tal Afar lies outside that region.

On Sunday, the top U.S. official in Iraq said he believes Saddam is still alive and in the country, though not orchestrating attacks on American troops.

Paul Bremer, speaking to NBC's "Meet the Press," said there was no evidence of central control in the assaults, calling them "highly professional but very small, sort of squad-level attacks, five or six people at a time attacking us."

Still, he said, getting Saddam would help the situation.

"The sooner we can either kill him or capture him, the better, because the fact that his fate is unknown certainly gives his supporters the chance to go around and try to rally support for him," said Bremer.

In another troubling sign, a two-car convoy carrying members of the International Organization for Migration were ambushed near the southern city of Hilla when a pickup truck pulled up alongside one car and opened fire.

The car collided with a bus. Personnel in a World Health Organization convoy traveling behind the IOM vehicles treated three injured and took the Iraqi driver to a hospital, where he died, said Omer Mekki, the WHO deputy director in Iraq.

Both convoys were clearly marked as U.N. vehicles.

"We're a bit shaken. Everybody is a bit shocked," said Mekki. "But when we were recruited and we came to Iraq, we knew there were risks. An incident like this is not unexpected.

Ahmed Fawzi, spokesman for the special representative of U.N. Secretary-General Kofi Annan, denounced the attack. "The United Nations is in Iraq to help the Iraqi people. We are not taking sides," he said in Baghdad.

"We have no way of knowing whether this was targeted at the United Nations. This is a dangerous situation. Only the restoration of law and order can put an end to these attacks," he said. The U.N. World Food Program was targeted in a July 6 grenade attack in Mosul, and four days later, the agency issued a release citing concern over the security situation in Iraq.

U.N. special representative Sergio Vieira de Mello left Iraq on Sunday. He is to report to the U.N. Security council on Tuesday.

Meanwhile, in Najaf, thousands of followers of Shiite Muslim cleric Muqtada al-Sadr set out from the Imam Ali shrine on a six-mile march to U.S. headquarters there, shouting slogans against the new, U.S.-sanctioned Iraqi Governing Council and the Americans.

"Long live al-Sadr. America and the Council are infidels," chanted the crowds. "Muqtada, go ahead. We are your soldiers of liberation."

U.S. troops prevented the demonstrators from entering the headquarters and soldiers barricaded the building with Humvees. The crowd dispersed after clerics read out an appeal by al-Sadr to go home.

Earlier, al-Sadr said in a statement read inside the shrine that he wanted coalition forces to leave Najaf and allow Iraqis to handle security for themselves. In his Friday sermon, the cleric said he was recruiting a private army but fell short of calling for armed struggle against the U.S. occupation.

A coalition official dismissed the threat, but said no private armies will be tolerated.

"The only army in Iraq will be the new Iraqi army, which is being formed," the official said, speaking on condition of anonymity. "Anyone found with an unlicensed weapon will be arrested."

The U.S.-led coalition has begun building what it hopes will eventually be a 40,000-strong military force. On the first day of recruiting Saturday, the coalition processed 5,000 applications at centers in Mosul, Baghdad and the southern city of Basra, the official said.

Al-Sadr, thought to be 30 years old, is not considered a high-ranking Shiite cleric. Most of his support is by virtue of his being the son of Imam Mohammed Sadiq al-Sadr, a top Shiite religious leader assassinated by Saddam's agents in 1999.

A bomb detonated prematurely in the capital on Sunday, missing a U.S. Army convoy. The U.S. military quickly sealed off the area as Army experts searched for more explosive devices. Two more were found and defused.

Two rocket-propelled grenades were fired at — and missed — a U.S. convoy on the outskirts of Tarimiya, 25 miles north of Baghdad.

A large fire broke out at a warehouse of the international aid group CARE near the Baghdad railroad yard. Paint and wood were stored in the building, witnesses said.