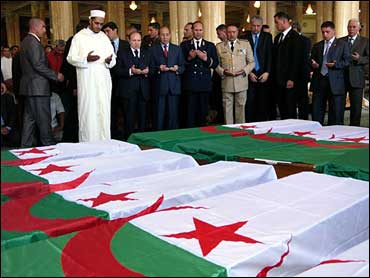 The death toll in the bombing of an Algerian coast guard barrackls has risen to 28, according to hospital officials.

The bomb went off in the northern coastal town of Dellys, about 30 miles from Algiers.

The attack came just two days after another bombing killed at least 20 in a crowd of people in eastern Algeria who were waiting to see visiting President Abdelaziz Bouteflika.

There was widespread speculation that Bouteflika was the intended target of that attack, though Algerian officials kept silent on that question. Police said the bomber was killed by security services after he dropped the explosives and tried to escape.

There was no immediate claim of responsibility in either attack.

However, an al Qaeda affiliate calling itself al Qaeda in Islamic North Africa has been active in Algeria lately. The group claimed responsibility for other attacks this year, including an April suicide bombing outside the prime minister's office in Algiers and a simultaneous attack on a police station that killed dozens.

Algeria's insurgency broke out in 1992, after the army canceled legislative elections that a now-banned Islamic fundamentalist party was poised to win. Up to 200,000 people - Islamic fighters, security forces and civilians - have been killed over the years, according to estimates.

Widespread killing was on the wane until recently, but sporadic violence resurfaced this year after Algeria's Salafist Group for Call and Combat, or GSPC, officially linked with al Qaeda, taking the name al Qaeda in Islamic North Africa.