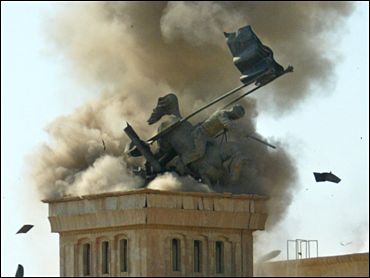 A U.S. soldier was killed Friday when guerrillas detonated a bomb under a military convoy in which he was traveling in the violent "Sunni Triangle" city of Fallujah west of Baghdad, the military said.

The 3rd Infantry division soldier died from injuries in the mid-afternoon attack on the main Fallujah bridge over the Euphrates River, according to spokeswoman Sgt. Amy Abbott.

He was the 148th U.S. soldier to fall in combat since the war began – one more than died in the first Iraq war 12 years ago, reports CBS News Correspondent David Hawkins. Since major combat operation ended May 1, a total of 34 soldiers have now been killed.

The death came as U.S. troops continued to try to stabilize the country and protect themselves from attacks by remnants of Saddam Hussein's toppled regime.

U.S. Army engineers defused what they describe as a huge homemade bomb found on a highway near the Baghdad airport during a routine patrol.

And in another symbolic thrust at the former regime, the U.S. military used 12 pounds of plastic explosives to topple a 30-foot statue of Saddam in Tikrit.