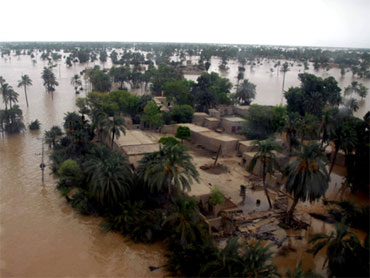 The death toll from massive floods in northwestern Pakistan rose to 1,100 Sunday as rescue workers struggled to save more than 27,000 people still trapped by the raging water.

The rescue effort was aided by a slackening of the monsoon rains that have caused the worst flooding in decades in Khyber-Pakhtoonkhwa province. But as flood waters started to recede, authorities began to understand the full scale of the disaster.

The flooding, which the U.N. estimates has affected 1 million people nationwide, comes at a time when the Pakistani government is already grappling with a faltering economy and a war against the Taliban.

The United States announced Sunday that it would provide Pakistan with $10 million in humanitarian assistance, a high-profile gesture at a time when the Obama administration is trying to dampen anti-American sentiment in the country.

The 1,100 death toll from the flooding could go even higher since rescue workers have been unable to access certain areas, said Adnan Khan, a disaster management official.

Almost 700 people have drowned in the Peshawar valley, which includes the districts of Nowshera and Charsadda, and 115 others are still missing, Khan said.

The districts of Swat and Shangla have also been hit hard and have suffered more than 400 deaths, said Mujahid Khan, the head of rescue services for the Edhi Foundation, a private charity.

Residents of Swat were still trying to recover from a major battle between the army and the Taliban last spring that caused widespread destruction and drove some 2 million people from their homes. About 1 million of those were still displaced.

In Swat alone, the floods have destroyed more than 14,600 houses and 22 schools, said Khan.

Authorities have deployed 43 military helicopters and more than 100 boats to try to rescue some 27,300 people still trapped by the floods, said Rehman, the disaster management spokesman.

"All efforts are being used to rescue people stuck in inaccessible areas and all possible help is being provided to affected people," said Rehman.

But some residents stepped up their criticism Sunday of the government's response.

"The flood has devastated us all, and I don't know where my family has gone," said Hakimullah Khan, a resident of Charsadda town who complained the government has not helped him search for his missing wife and three children.

"Water is all around and there is no help in sight," said Khan.

However, some people like Sehar Ali Shah who were rescued complained that authorities didn't provide shelter that would allow them to stay until the floodwaters receded.

"My son drowned, but I don't see the government taking care of us," said Shah after returning to his half-submerged house in the city of Nowshera. "The government has not managed an alternate place to shift us."

"We have lost everything: our houses, our crops, cattle," said Ahmad Hasan at a government relief camp in Taunsa Sharif district.

The threat of disease loomed as well as some evacuees in the northwest arrived in camps with fever, diarrhea and skin problems.

"There is now a real danger of the spread of waterborne diseases like diarrhea, asthma, skin allergies and perhaps cholera in these areas," said Shaharyar Bangash, the head of operations in Khyber-Pakhtoonkhwa for World Vision, an international humanitarian group.

A variety of nations and aid organizations have begun to mobilize a response to the disaster.

"This is much-needed stuff in the flood-affected areas and we need more of it from the international community," said Rehman.

The U.S. Embassy in Islamabad also announced it will provide 12 prefabricated steel bridges to temporarily replace those damaged by the water.

But some residents wondered how they would ever recover from such a disaster.

"I won't be able to cover my losses for 10 years," said Shair Dad, a timber shop owner in Nowshera who lost most of his wood in the floodwaters.