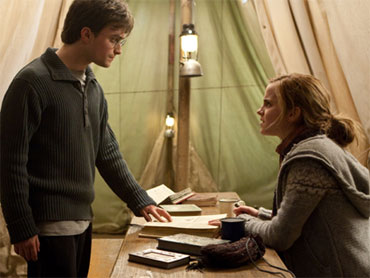 Harry Potter has cast his biggest box-office spell yet with a franchise record $125.1 million domestically over opening weekend, according to studio estimates Sunday.

In terms of domestic revenue, "Deathly Hallows: Part 1" came in ahead of the series' best previous debut of $102.7 million for 2005's "Harry Potter and the Goblet of Fire."

But factoring in today's higher admission prices, the latest movie had roughly the same size audience as the franchise's best previous draws -- "Goblet of Fire" and 2001's "Harry Potter and the Sorcerer's Stone," which launched the series. "Deathly Hallows" and those two earlier movies each sold around 16 million tickets in their first weekend.

Overseas markets for "Deathly Hallows" were led by a $28 million opening in Great Britain, $21.8 million in Germany, $14.8 million in Australia, $14 million in Japan and $12.3 million in Russia.

The movie audience has grown up along with young wizard Harry (Daniel Radcliffe) and his friends Hermione (Emma Watson) and Ron (Rupert Grint). Distributor Warner Bros. reported that 25 percent of the audience for the new movie was between 18 and 34, compared with only 10 percent for "Sorcerer's Stone" nine years ago.

"When we started 'Harry Potter,' basically, the audience was driven to theaters by their parents. Today, those same kids are driving to the midnight shows themselves," said Dan Fellman, head of distribution for Warner Bros.

DreamWorks Animation's "Megamind," the No. 1 movie the previous two weekends, fell to second-place with $16.2 million, raising its three-week total to $109.5 million.

Russell Crowe's thriller "The Next Three Days," the weekend's only other new wide release, debuted weakly at No. 5 with $6.8 million. Crowe plays a college instructor who plots a jail break to free his wife (Elizabeth Banks) after she's convicted of murder.

The huge opening bodes well for next July's "Deathly Hallows: Part 2," the eighth and final movie based on J.K. Rowling's seven "Harry Potter" novels. The franchise so far has taken in more than $5.5 billion worldwide.

Warner Bros. plans to release "Deathly Hallows: Part 2" in 3-D, which should give it a big box-office boost, since theaters charge a few dollars more to see movies projected in 3-D compared with 2-D.

"This is kind of the warm-up to the potentially 3-D supercharged finale, and that could really take these 'Potter' numbers to another level," said Paul Dergarabedian, box-office analyst for Hollywood.com.

The studio had hoped to release "Deathly Hallows: Part 1" in 3-D, but the filmmakers ran out of time to convert the film, which was shot in 2-D, for 3-D projection.

With $61.2 million Friday, "Deathly Hallows: Part 1" had the fifth-biggest opening day ever.

The film took in $12.4 million, just over 10 percent of its weekend domestic revenue, in huge-screen IMAX theaters. That broke the previous IMAX record debut of $12.1 million set in March by "Alice in Wonderland."

"Harry Potter" was not able to lift Hollywood's total weekend receipts above last year's. Overall revenue came in at an estimated $197 million, down 24 percent from the same weekend a year ago, when the industry had a one-two punch with debuts of $142.8 million for "The Twilight Saga: New Moon" and $34.1 million for "The Blind Side," according to Hollywood.com.

Hollywood is poised for big business over the Thanksgiving holiday, one of its busiest weekends.