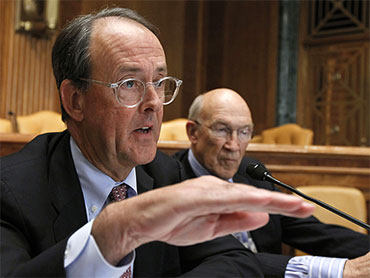 The leaders of the deficit commission are baldly calling out the budget myths of both political parties, challenging lawmakers to engage in the "adult conversation" they say they want.

Their plan - mixing painful cuts to Social Security and Medicare with big tax increases - has no chance of enactment as written, certainly not as a whole. But the commission's high profile will make it harder for Republicans and Democrats to simply keep reciting their tax and spending talking points without acknowledging the real sacrifices that progress against government deficits would demand.

It's time for both conservatives and liberals to "put up or shut up," says Jon Cowan, head of the centrist-Democratic group Third Way, which praised the bold new proposals and urged politicians to show courage. Republicans failed to produce their often-promised deficit reductions when they controlled the government, Cowan said, and Democrats refuse to acknowledge that entitlement programs such as Social Security and Medicare must be trimmed.

Already, some top elected officials - House Speaker Nancy Pelosi, for one - have declared Wednesday's proposals by the leaders of President Barack Obama's bipartisan commission unacceptable. Others still say deficits can be reduced in relatively easy ways, a notion that few mainstream economists accept.

As The New York Times reported Friday, the GOP rank and file will face intense pressure from the rising Tea Party movement to flatly reject any eventual deal that includes tax increases, giving Republican leaders very little wiggle room as they sit down to hash out that deal with Democrats.

There's no need to trim Social Security, Sen. Jim DeMint, R-S.C., a tea party favorite, said Sunday on NBC's "Meet the Press." "If we can just cut the administrative waste," he said, "we can cut hundreds of billions of dollars a year at the federal level."

include calls to raise the Social Security retirement age and reduce scheduled benefit increases, , cut farm subsidies and increase the federal tax on gasoline by 15 cents a gallon.

The co-chairmen's ideas, which they agree are simply a starting point, include slashing the federal workforce by 10 percent, or 200,000 jobs, whacking the Pentagon budget with more than $100 billion in cuts, cutting farm subsidies dramatically and upping the federal tax on gasoline by 15 cents a gallon, reported CBS News Chief White House Correspondent Chip Reid.

The most vocal critics of the plan, which would cut spending by $3 for every $1 raised through higher taxes, are Democrats. Many will strongly oppose the bid to slowly raise the Social Security retirement age to 69. Republicans, especially three commission members appointed by incoming House Speaker John Boehner, are likely to balk at tax increases.

Opinion is split on whether 14 of the panel's 18 members will ultimately agree on a plan. That's the number needed to demonstrate bipartisan support and send the measure to the Senate and, maybe, the House for a vote. Either way, commission members are unlikely to produce actual legislation that could become law. But they could bless a set of recommendations that would put lawmakers on record for or against a serious deficit-reduction recipe.

The panel was created out of both parties' frustration with the government's chronic inability to control budget deficits and the national debt. The idea is that Republicans and Democrats might join hands and vote for an unpopular mix of tax increases and program reductions because the shame and hypocrisy of doing nothing would be too great.

Ultimately it's the public that often drives decisions by lawmakers and a president, all craving re-election.

"The voters are the most culpable group of all," says former Rep. Tom Davis, R-Va. They embrace the idea that "we don't need new revenues, and all these programs are sacrosanct," he said in an interview.

"Nobody wants to make hard decisions," Davis said, adding that partisan commentators such as Glenn Beck on the right and Rachel Maddow on the left might be better positioned to call on Americans to share some pain to avoid a debt crisis.

Obama created the commission after the Senate rejected a plan by Sens. Kent Conrad, D-N.D., and Judd Gregg, R-N.H., to establish a similar but stronger panel comprised exclusively of lawmakers and administration officials. Creation of the Bowles-Simpson commission was a promise required to get Senate Democrats to cast a politically perilous vote last January to allow the government to go a whopping $1.9 trillion deeper in debt. Days later, Obama proposed a budget mostly devoid of tough choices, leaving it to the commission to propose solutions.

He has no administration officials on the panel, so it was easy for spokesman Bill Burton to distance the White House from Wednesday's recommendations by Bowles and Simpson. Burton called them "only a step in the process."

This is hardly the first time Washington has resorted to a blue ribbon panel to take on a politically difficult issue. Some work out better than others.

A 1994 deficit commission was a bust. So was a 2005 tax reform panel established by President George W. Bush. It called for erasing tax breaks that many Americans enjoy, including the tax deduction on home mortgage interest - an idea endorsed by Bowles and Simpson on Wednesday. The Bush White House response: Thanks but no thanks.

On the other hand, a 1982 Social Security commission chaired by Alan Greenspan came up with a plan for solvency that earned the blessing of President Ronald Reagan and House Speaker Thomas O'Neill, D-Mass. It passed Congress easily and generated almost three decades of program surpluses.

Bowles and Simpson no longer hold top offices, so they were able to produce a plan that would gore everyone's ox. It's actually a discussion draft, which the men decided to publicize after Wednesday's commission meeting because leaks seemed inevitable.

Their proposal surprised many people because the duo had kept such a low profile before this week. Expectations have been low that they would be able to produce anything that could get support from enough members of their own panel.

But in releasing such a slap-in-the-face plan, the co-chairmen grabbed headlines and riveted interest groups across the political spectrum. In one stroke, they seemed to change the national conversation on the deficit, at least for a while.

Besides Democrats concerned about big cuts in entitlement programs, the plan may cause discomfort for dozens of Republicans who won congressional elections last week after vowing to cut the deficit but offering few or no details on how to do it. The House GOP's "Pledge to America" doesn't propose touching Social Security and Medicare, instead focusing vaguely on domestic programs passed every year by Congress - which are only about one-seventh of the budget.

Even people who don't like the Bowles-Simpson plan credited the men for jump-starting a national debate on the nation's precarious fiscal posture.

Soon Congress must decide whether that is all it will do.