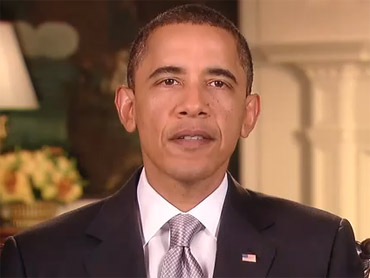 Will Congress extend the Bush tax cuts into 2011 in the weeks after Tuesday's election or let the automatic increase start cutting into most people's paychecks early next year?

It's really pretty much up to President Barack Obama.

Despite the punishment his fellow Democrats are expected to take from voters, Obama has shown no sign of retreating from his insistence that families and small businesses with incomes above $250,000 return to higher, Bill Clinton-era tax levels starting Jan. 1.

But Obama also has dodged the question whether he would veto a bill that extends the tax cuts for everyone.

The expiring tax cuts were enacted in 2001. They include lower income tax rates, a $1,000 per-child tax credit, relief for married couples, and lower taxes on investments and large estates.

Many longtime Congress-watchers think it'll come down to two options: extending the full roster of former President George W. Bush's tax cuts for a year in a lame-duck session that opens Nov. 15, or punting the issue until next year for Obama and a new, more Republican Congress to figure out.

Republicans are hoping to ride a wave of economic fears and anti-Washington anger to a possible takeover of the House and at least several more seats in the Senate. They're certain to stand firm on their promise to extend the Bush-era tax cuts in their entirety. Democrats were divided on the issue even before the election.

About three dozen mostly moderate House Democrats and a few Senate Democrats already oppose Obama's position on raising rates for the wealthy. So do Gov. Joe Manchin, D-W.Va., and Chris Coons, D-Del., who would immediately join the Senate if elected Tuesday. If the question were actually put to votes in Congress, the GOP might win.

From a purely political perspective, Obama can solidify his standing with the Democratic base by fighting for his position or appeal to the middle by showing an ability to work with Republicans.

"The middle class has to get more than a few Tootsie rolls in their treat bag for Halloween here. We just can't keep this policy of having the wealthiest get the biggest chunk of these tax cuts," said Sen. Amy Klobuchar, D-Minn.

Appearing with her on CBS' "Face the Nation," GOP Rep. Peter King of New York said "it's only the last few weeks we've heard any talk of a compromise at all."

Elmendorf said Obama should cut a deal because letting the tax cuts expire would be a political disaster. "Showing that he can work with Republicans in the postelection atmosphere is going to be important, and this is the first way to do it," he said.

Sen. John Cornyn, D-Texas, appearing Sunday on ABC's "This Week," envisioned a deal that continues all the Bush tax cuts "for the near term, perhaps the next couple of years. Perhaps there's a bipartisan solution there."

Regardless of how the battle turns out this fall, the Bush tax cuts will be in effect for purposes of next year's filing season. If the tax cuts expire as scheduled on Dec. 31 but are renewed early next year, workers might see smaller paychecks for only a while, assuming the Internal Revenue Service issues withholding tables that reflect a return to pre-Bush tax rates.

Equally problematic for taxpayers if Congress doesn't act is the alternative minimum tax, enacted four decades ago to make sure the wealthy pay at least some tax.

Congress makes temporary fixes every year or two to prevent it from hitting middle- and upper-middle-class families. The last fix expired in January. Without another, 26 million families would face tax bills in April averaging $2,600 higher, according to congressional estimates.

Whatever the decision, it will have big political and policy implications. Making all the tax cuts permanent would add about $3.9 trillion to the national debt over the next decade. Obama's plan to make the wealthy pay more would reduce that added debt by about $700 billion.

"You can argue it either way, but I think the first issue for the president will probably be restoring confidence in him amongst his base," said pollster Andrew Kohut of the Pew Research Center for the People and the Press. "On the other hand, he has to address independents, who are more inclined to want to see compromise and the branches of government working together."

"Disfunction means the only thing that can get done is the easiest thing, and the easiest thing is a one-year extension," said Republican strategist John Feehery, a former longtime Capitol Hill aide.

Vice President Joe Biden seemed to suggest a willingness to compromise in an Oct. 22 interview on Bloomberg TV.

Asked whether the administration was willing to compromise on the $250,000 threshold, Biden said, "I think it is important we get the middle-class tax cut made permanent. And so I think we are open to speak to the Republicans, if they really mean it, if they are talking about deficit reduction, if they are willing to move."

That's probably a debate for next year, not the lame-duck session.