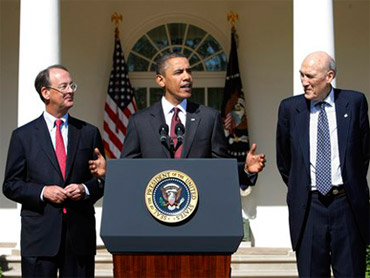 As part of a proposal to wrestle $1-trillion-plus deficits under control, their plan would also curb the growth of Medicare. It came a week after voters put Republicans back in charge of the House and told Washington that the government is too big.

On Social Security benefits would be reduced for higher incomes and the retirement age would gradually increase from 67 to 69.

Some taxes would be cut, including tax rates for the highest bracket of 35 percent could go as low as 23 percent. Corporate rates would go from 35 percent to as low as 26 percent. The alternative minimum tax intended for upper tax brackets and now hitting the middle class families would be eliminated.

Is Either Party Serious about Cutting the Deficit?

However, the plan by Chairman Erskine Bowles and former Sen. Alan Simpson, the co-chairman, doesn't look like it can win the support from 14 commission members that is needed to force a debate in Congress. Bowles is a Democrat and was former President Bill Clinton's White House chief of staff. Simpson is a Wyoming Republican.

The two were among the first to acknowledge their plan's unpopularity - and to suggest it would be a nonstarter in Congress.

"We'll both be in a witness protection program when this is all over, so look us up," Simpson quipped to reporters. Bowles said: "We're not asking anybody to vote for this plan. This is a starting point."

The White House reserved judgment. "The president will wait until the bipartisan fiscal commission finishes its work before commenting," said White House spokesman Bill Burton. Burton called the proposals "only a step in the process." He said Obama respects the panel's challenging assignment "and he wants to give them space to work on it."

The proposals were floated as the Treasury Department reported that the federal government began the new budget year with a deficit in October that totaled $140.4 billion -- down 20 percent from a year ago but still the third highest October shortfall on record. Even with the improvement, last month's red ink set the stage for what is expected to be a third consecutive year of $1 trillion-plus deficits.

The commission is supposed to report a deficit-cutting plan on Dec. 1, but panel members are unsure at best whether they'll be able to agree on anything approaching Obama's goal of cutting the deficit to about 3 percent of the size of the gross domestic product.

Building the needed support of 14 of its 18 members will be difficult. Cuts to Social Security and Medicare are making some liberals on the panel recoil. And conservative Republicans are having difficulty with the options suggested for raising taxes. The plan also calls for cuts in farm subsidies, foreign aid and the Pentagon's budget.

"This is not a proposal I could support," said panel member Rep. Jan Schakowsky, D-Ill. "On Medicare and Social Security in particular, there are proposals that I could not support."

The plan released by Bowles is only a proposal put forth by him and Simpson. Members of the commission will resume debate on it later Wednesday and next week in a long-shot bid to reach a compromise.

The release of the proposal comes just a week after midterm elections that gave Republicans the House majority and increased their numbers in the Senate. During the campaign, neither political party talked of spending cuts of the magnitude proposed by Bowles, with Republicans simply proposing $100 million in cuts to domestic programs passed each year by Congress.

"It's a very provocative proposal," said a Republican panel member, Rep. Jeb Hensarling of Texas. "Some of it I like. Some of it disturbs me. And some of it I've got to study."

But member Sen. Judd Gregg, R-N.H., called the proposal "an aggressive and comprehensive plan for getting federal spending, deficits and the debt under control. ... This will not be the final proposal, but it is a significant step down the path of establishing fiscal responsibility."

Other proposals by Bowles and Simpson include:

• Increasing the gas tax by 15 cents a gallon to fund transportation programs.

• A three-year freeze in the pay of most federal employees and a 10 percent cut in the federal work force.