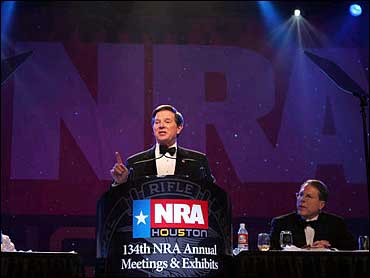 Under fire for possible ethics violations, House Majority Leader Tom DeLay went home to Texas over the weekend for some much-needed support.

The Republican from nearby Sugar Land, Texas only briefly mentioned the ethics accusations, telling members of the gun-rights group that he appreciated their support. He accused liberal Democrats and the national media of giving him a hard time.

"When a man is in trouble or in a good fight, you want to have your friends around, preferably armed. So I feel really good," said Delay during the convention's keynote address Saturday night.

About 2,550 NRA members paid $75 to hear DeLay's speech and dine on salad with goat cheese and sirloin steak with peppercorn cognac sauce. Many wore stickers that read: "I'm for the NRA and Tom DeLay."

Some of DeLay's Republican colleagues have suggested in recent weeks that he resign as scrutiny builds over his overseas trips, political fund raising and his association with a lobbyist who is under federal investigation.

Three DeLay associates and eight corporations have been indicted in the investigation, although three companies have reached agreements with the prosecutor.

DeLay has not been charged with any wrongdoing in any of the cases and has denied any legal or ethics violations.

However, more than 100 protesters gathered outside, including some who claimed to be conservative Republicans, to call for his ouster, reports Chen.

"He is an embarrassment to our district," said protester Patricia Baig, a 57-year-old retired school teacher from Missouri City, Texas. "He doesn't represent his district and it is time for him to do the honorable thing and resign."

As the debate over the allegations heats up, supporters repeat his denials of wrongdoing and his claim that Democrats have whipped up a partisan plot against him.

"This is about the destruction of a strong party leader," said Sen. Trent Lott, R-Miss.

"Everyone in the Congress knows that Tom DeLay has not been found in violation of any rule, regulation, statute or law at all," said Rep. David Dreier, R-Calif. on CBS News' Face The Nation.

"He wants to be investigated. He wants to have a chance to clear his name by going before the House Ethics Committee so that whatever question is out there can, in fact, be addressed," Dreier said.

Even Democrats acknowledge he won't be forced out soon.

"Tom DeLay is called 'the hammer.' He loves it. He says that his supporters should have arms, and he takes no prisoners," said Rep. Charlie Rangel, D-N.Y., also on Face The Nation.

"But what he is doing by stonewalling these accusations, the clouds of corruption are not just on the Republicans but the entire House of Representatives," Rangel added.

The NRA, which has 4 million members, has helped elect Republican lawmakers, such as DeLay, who support the group's efforts to limit lawsuits seeking damages against gun manufacturers and distributors and to make sure a ban on assault weapons isn't resurrected.

"His work to preserve our constitutional rights has earned the respect of his colleagues, our 4 million members, and millions of law-abiding gun owners across this nation," he said.

In the end, DeLay has the backing where it really counts -- in the bank, adds Chen. A new look at his campaign committee's finances finds the donations are still coming in, even as the questions and criticism do, too.