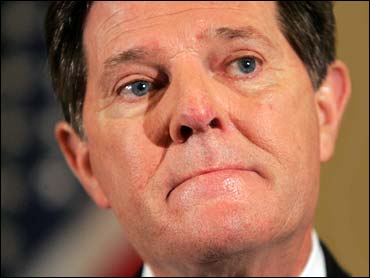 House Majority Leader Tom DeLay said Tuesday that Supreme Court Justice Anthony Kennedy's work from the bench has been "incredibly outrageous," his latest salvo at the federal judiciary in the weeks following the courts' refusal to stop Terri Schiavo's death.

DeLay, who has been under attack for alleged ethics violations, blasted Kennedy, a Reagan appointee, as an example of Republican members of the Supreme Court who were activist and isolated.

"Absolutely. We've got Justice Kennedy writing decisions based upon international law, not the Constitution of the United States? That's just outrageous," DeLay told Fox News Radio. "And not only that, but he said in session that he does his own research on the Internet? That is just incredibly outrageous."

A spokeswoman for the court, Kathy Arberg, said Kennedy could not be reached for comment.

"I think Tom DeLay's point is that he's calling Justice Kennedy one of those so-called activist judges who doesn't rely solely on the Constitution when he writes his opinions," said CBS News Correspondent Gloria Borger.

"DeLay believes the Congress is the place to fix all of that. He said in his interview today that Congress sets the courts up, we can also dismantle them."

Borger adds, "DeLay is far from alone on this. Right now, for social conservatives, the question of who sits on the bench is issue number one."

Although Kennedy was appointed to the Supreme Court by President Ronald Reagan, a conservative icon, he has aroused conservatives' ire by sometimes agreeing with the court's more liberal members. Nevertheless, it is unusual for a congressional leader to single out a Supreme Court justice for criticism.

Dan Allen, a DeLay spokesman, declined comment on the interview.

DeLay himself has been criticized for his comments following Schiavo's death, which came despite Congress' passage of a law giving the federal courts jurisdiction to review her case. They declined to intervene.

"The time will come for the men responsible for this to answer for their behavior," DeLay said in a statement.

He apologized last week, saying he had spoken in an "inartful" way.

Conservatives have been pushing to get the Senate to confirm President Bush's most conservative judicial nominees, which Senate Democrats are blocking. The House has no power over which judges are given lifetime appointments to the federal bench.

However, DeLay has called repeatedly for the House to find a way to hold the federal judiciary accountable for its decisions. "The judiciary has become so activist and so isolated from the American people that it's our job to do that," he said.

One way would be for the House Judiciary Committee to investigate the clause in the Constitution that says "judges can serve as long as they serve with good behavior," he said. "We want to define what good behavior means. And that's where you have to start."

Also in the Fox interview, DeLay denied any wrongdoing in relation to the ethics charges against him and pinned the controversy on a "left-wing syndicate" that's seeking to bring him down.

"I'm suggesting there's a left-wing syndicate. That's for sure, we've documented it," he said.

"These people are all hooked up. The same people that went after George W. Bush have just changed their focus onto me. They are running ads, they are raising money. This is pretty serious stuff," DeLay said.