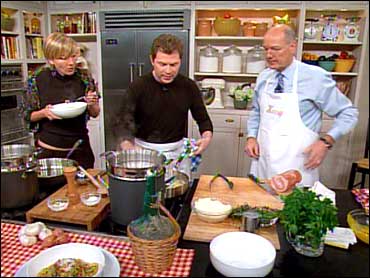 You don't need to travel to Italy for delicious Italian food.

The Early Show resident chef Bobby Flay serves up some recipes Thursday for simple, yet delicious pasta dishes. He shows that preparing pasta doesn't require lots of time and ingredients.

Carbonara is a sauce for pasta. It's made from eggs, minced bacon or ham, grated cheese, and seasonings. It's a traditional Italian sauce, and one of the most popular pasta sauces. Carbonara recipes vary, but they're all made from eggs, black pepper, and pancetta. Some recipes also include cream, garlic and parsley.

Like most traditional recipes, the origins of the dish are obscure, with differing accounts. It's sometimes dated back to the Roman period.

The name is derived from the Italian word for charcoal. Some say the pasta was first made as a hearty dish for Italian charcoal makers. Others say it was originally made over charcoal grills, while others say it's so-named because the specks of bacon and pepper in the pasta look like bits of charcoal.

Some even suggest that it was created by the Carbonari ("coal makers"), the members of an Italian secret society, because the ingredients could be kept in caves and other hiding places for a long time without deteriorating.

Spaghetti is a classic cut of pasta made from thin, round strands. A versatile pasta shape, spaghetti can be used in entrées, side dishes, and cold salads, or broken up and used in soups. Toss spaghetti with almost any pasta sauce, regardless of thickness. Tomato or cream sauces, broth-based sauces, olive oil tosses and meat sauces all work well with spaghetti.

1. Bring a large pot of salted water to a boil, add the spaghetti and cook until al dente, about 8 minutes.
2. Heat the olive oil in a large high sided sauté pan over medium heat. Add the garlic and cook until lightly golden brown. Remove the garlic with a slotted spoon to a plate. Add the chile flakes to the oil and cook for 30 seconds. Carefully remove 1/4 cup of the pasta cooking liquid from the pot and add to the sauté pan with the chiles.
3. Before draining the pasta well and add to the sauté pan, tossing to coat with the oil/chile mixture. Season the pasta with salt and pepper and stir in the basil or oregano. Transfer to a platter and sprinkle with grated cheese.

1. Bring a large pot of salted water to a boil, add the fettuccine and cook until al dente, approximately 8 minutes.
2. While the pasta is cooking, heat the olive oil in a large sauté pan over medium heat, add the pancetta and season with black pepper and cook until golden brown and crispy. Remove the pan from the heat.
3. Whisk together the eggs, heavy cream and 1/2 cup of the parmesan cheese in a medium bowl and season with salt and pepper.
4. Before draining the pasta, remove 1 cup of the cooking water and set aside. Drain the pasta well and return it to the pot, add the pancetta and egg mixture and toss to combine. Stir in the remaining 1/2 of cheese and some of the cooking liquid if the sauce appears too dry. Stir in the parsley and serve immediately.