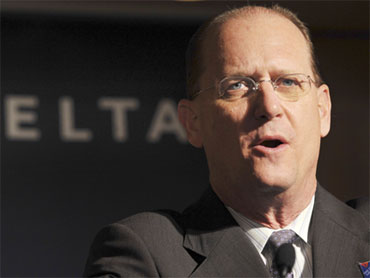 Delta Air Lines Inc., the world's biggest airline operator, is planning to cut more management and administrative jobs, but isn't saying how many, according to a recorded message and a memo from top executives.

Chief Executive Richard Anderson said in a recorded message to employees Thursday that Delta has seen its revenue stream decline by billions of dollars because of the weak economy and the drop-off in demand for air travel.

Atlanta-based Delta is cutting more capacity and has previously hinted that more frontline employee positions may have to be cut.

Anderson said Delta needs to be more aggressive at saving money in its administrative and management budgets.

"We will accomplish this through budget reductions, including vendors and professional services," Anderson and President Ed Bastian said in a memo Thursday to officers and directors that also was circulated internally to other employees. "Unfortunately, because of the severity of this economic downturn, we also must eliminate additional salaried positions beyond the management and administrative jobs already reduced over the last 18 months."

The executives said the planned action, though painful, will help the airline "maintain our competitive position as a strong, viable airline for our employees, shareowners and customers."

Delta, including its subsidiaries, had 82,968 full-time employees as of June 30, according to a recent regulatory filing. The total includes employees from Delta and Northwest Airlines and regional carriers Mesaba, Compass and Comair.

Last month, Delta announced a loss of $257 million for the second quarter.

Delta said the global recession, exacerbated by the impact of the swine flu virus, has caused the company's revenue to decline more than $3 billion for the first six months of the year, translating to more than $40,000 in lost revenue per employee.

"We do not expect our revenues to significantly improve through the remainder of the year," Anderson and Bastian said in their memo.

Delta plans to cut international capacity by 15 percent starting in September. Delta has also said it will reduce system capacity by 10 percent this year compared to 2008.

Capacity, as measured in available seat miles, can be reduced in a number of ways, including removing planes from the air, using smaller planes on some routes and reducing the number of frequencies to certain destinations.

Shares of Delta added 14 cents to $7.43 in Friday morning trading.