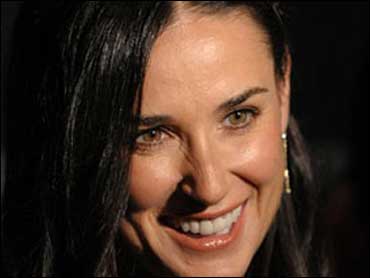 Actresses Demi Moore and Nia Vardalos were linked to an online chain of Twitter posts that ultimately led to Florida authorities intervening Friday when an 18-year-old man was threatening to commit suicide.

Moore's Twitter account, mrskutcher, was among those responding to a message from a young man threatening to hang himself in his front yard in Casselberry, north of Orlando. Moore -- with more than 2.5 million followers -- and husband Ashton Kutcher are both active on the social network.

Moore got a tweet saying, "I'm about to go hang myself from a tree outside my house and end my life. I have no reason to live anymore."

He then said he would send out a live feed of his suicide.

Vardalos is one of Moore's followers. She saw the tweet and called a suicide prevention hotline in California and was connected to Florida police.

Vardalos' eponymous account included messages tellng of her calls to authorities. "I gave his name+city. They went to home, helped him," one message read.

In one call to police, Nardalos said, "I don't know this person. I'm reading a Twitter. I saw it on, um, Demi Moore's page, and she responds to him and says, 'R u serious?' And he says, 'Yes." '

The Seminole County Sheriff's Office said authorities received two calls around 2:30 a.m., one from California and one from Vancouver, British Columbia. Both callers reported the suicide threat on Twitter. There was no record of the callers' names, Lt. Sonia Pisano said.

Vardalos says she stayed online with the teenager, as police were dispatched to his home.

Deputies went to a home and took the man to a hospital, Pisano said.

The teen's mother told the deputy responding that her son "was very emotional and diagnosed with obsessive compulsive disorder," according to a report released Friday by the sheriff's office. Her son was sitting at his computer desk crying when he told the officer he "did not know what to do with himself without help" and admitted to posting the tweet.

The man was then placed in protective custody.

Twitter fans are praising Vardalos for her quick action. And Moore is thanking the "twitterverse" for supporting someone in pain.

Moore's Twitter account was involved in a similar case last April, when a California woman messaged that she was going to kill herself. San Jose police said they took a woman to a hospital for "psychiatric evaluation" after someone called about a tweet sent to Moore threatening suicide.

On "The Early Show" Monday, Dr. Jennifer Hartstein, a clinical psychologist who treats teens at risk for suicide, spoke with co-anchor Maggie Rodriguez about the phenomenon, and the increasing role of social networking sites in giving teens and those who would help them a place to seek that help: