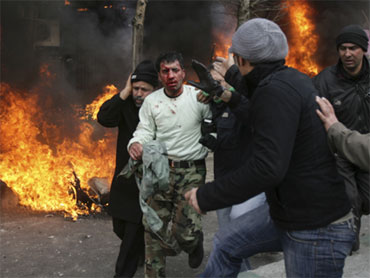 The crackdown in Iran in 2009 highlighted a continuing decline in freedom and rights for the fourth consecutive year, the democracy watchdog group Freedom House reported Tuesday.

The Middle East remained the most repressive region in the world and Africa sustained the most significant decline, the report said after examining political and civil rights in 194 countries and 14 territories.

Jennifer Windsor, executive director of Freedom House, cited attacks on front-line democracy activists, including what she said was brutal repression on the streets of Iran. She also pointed to sweeping detention in China of "Charter 08" advocates of expanding freedom and an end to Communist party dominance, as well as the murders of journalists and human rights activists in Russia.

Despite repression in China, the most significant rights improvements occurred in Asia.

The year was marked by intensified repression against human rights defenders and civic activists in 40 countries that comprise 20 percent of the world's population.

The four-year decline was the longest stretch of civil rights setbacks in the 40 years Freedom House has been publishing reports on freedom.

By contrast, 89 countries - with 46 percent of the world's population - were designated free by the group.

The report identified Iran, Russia, Venezuela and Vietnam as states that had become more repressive. Declines in freedom also occurred in countries that had been registering positive trends, the report said, including Bahrain, Jordan, Kenya and Kyrgyzstan.