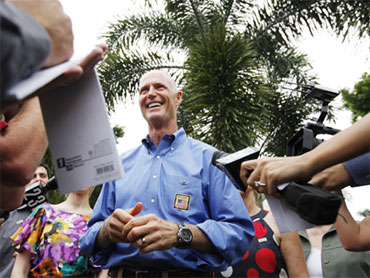 Tens of thousands of votes separated the candidates out of more than 5 million cast.

Scott will replace Gov. Charlie Crist, who eschewed a second term to run for U.S. Senate. He lost Tuesday to Marco Rubio.

Scott, 57, is a multimillionaire who unexpectedly jumped into the Republican primary race in April. With an antiestablishment message and tea party backing, the political newcomer proceeded to spend about $73 million of his family's money beating Attorney General Bill McCollum for the GOP nomination and then taking on Sink.

After the August primary, he quickly picked up the backing of state GOP leaders, many of whom had worked to defeat him, and began to paint Sink as a "Tallahassee insider" who marches in lockstep with President Barack Obama.

Scott's albatross in the campaign has been his leadership of Columbia/HCA, a hospital conglomerate that ended up paying $1.7 billion in fines to settle federal charges of Medicaid and Medicare fraud.

Scott, who founded the company and built it into the largest for-profit hospital chain in the world, said he didn't know anything about criminal activity and was never charged, but now assumes responsibility for what happened on his watch. He wanted to fight the charges, but was forced out by his board in 1997.

Sink, 62, worked for 26 years in the banking business, eventually becoming one of the state's most prominent businesswomen. As Florida president of NationsBank - which later became Bank of America - she oversaw 9,000 employees, 800 branch banks throughout the state and $40 billion in customer deposits.

After parting ways with the bank in 2000, Sink stepped up to take a high-profile role in the failed gubernatorial campaign of her husband when he opposed Jeb Bush in 2002.

Then, positioning herself as an outsider, she won the job of Florida's chief financial officer in 2006 in her first ever election. The CFO is the Cabinet officer who not only pays the state's bills but has such other varied duties as regulating funeral homes, overseeing the fire marshal's office and investigating insurance fraud.