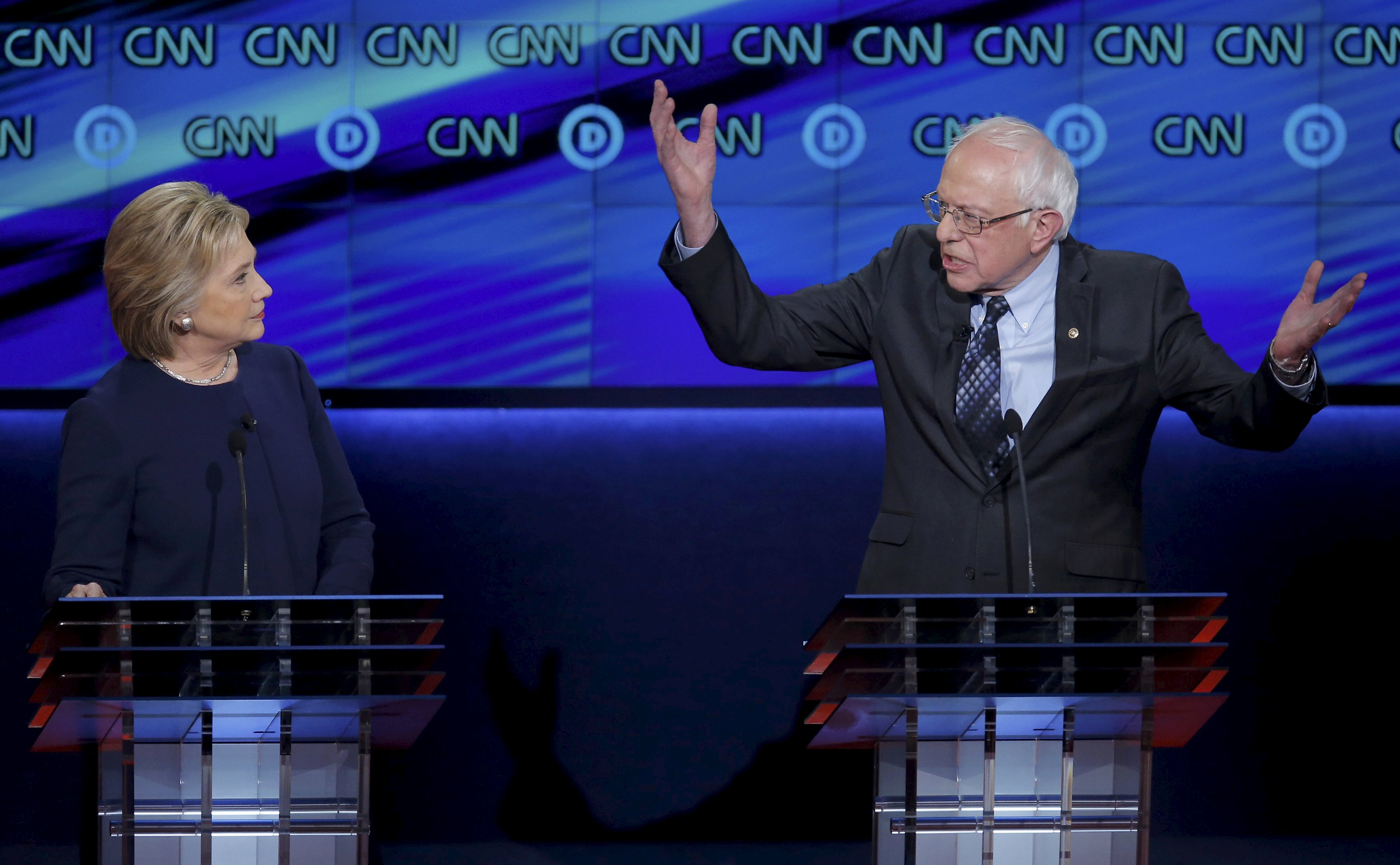 If Vermont Sen. Bernie Sanders was looking for a debate performance Sunday night that would change the trajectory of his Democratic nomination fight with front-runner Hillary Clinton, he didn't get one.

The Vermont senator and Democratic presidential candidate appeared visibly angry and on edge at points during the candidates' seventh time on the debate stage together, this time in Flint, Mich., hosted by CNN. And while he landed a few blows on Clinton over her ties to Wall Street and the issue of trade, he stumbled responding to Clinton's attack on his opposition to the auto bailout and at one point defended gun manufacturers.

Despite Sanders's victory Sunday night in the Maine caucuses, Clinton still has a significant delegate lead that will be difficult for him to overcome. He needed a big moment Sunday night to improve his prospects, and the debate didn't give him one.

The night had nowhere near the level of drama and vitriol that's characterized recent Republican debates, but Clinton and Sanders did get unusually heated on a handful of issues where their differences of opinion are well-documented.

After a relatively calm first half hour in which the candidates largely discussed issues on which they were in agreement, the first major sparks flew over the 2008-2009 auto bailout. Clinton, who had not previously spent time discussing Sanders's position on the bailout, hit him on the issue Sunday night. That same dynamic was in place when Clinton landed a hit on Sanders over being the lone Democrat to vote against the Export-Import Bank.

"In January of 2009, President-elect Obama asked everybody in the Congress to vote for the bailout. The money was there and had to be released in order to save the American auto industry and four million jobs and to begin the restructuring," Clinton said. "I voted to save the auto industry. [Sanders] voted against the money that ended up saving the auto industry. I think that is a pretty big difference."

"Your story is voting for disastrous trade agreements and voting for corporate America. Did I vote against the bailout when billionaires destroyed this economy, they went to Congress and they said, 'Please, we will be good boys, bail us out,'" he said. "You know what I said? I said let the billionaires themselves bail out Wall Street. It shouldn't be the middle class of this country."

Sanders planned to go after Clinton hard on trade, as he's done in recent days with the Michigan primary so close on the horizon. And he did: he brought up her history of support for what he called "disastrous trade agreements," specifically citing the North American Free Trade Agreement (NAFTA).

On the issue of Wall Street, he called again for Clinton to release the transcripts of her speeches to Wall Street groups, some of which netted her as much as $200,000 per speech.

"While we're on Wall Street: one of us has a super PAC. One of us has raised $15 million from Wall Street for that super PAC," he said. "One of us has given speeches on Wall Street for hundreds of thousands of dollars. Now, I kinda think if you get paid a couple hundred thousand dollars for a speech, must be a great speech." (Clinton said she will "be happy to release anything I have as long as everybody else does too.")

Another weak point for Sanders -- on an issue that's dogged him throughout the primary -- was his defense of gun manufacturers, and in one answer Sunday night, he seemed to go back to his previous position on immunity for those manufacturers. Sanders's 2005 vote in favor of limiting liability for gun manufacturers has been one of the primary points his detractors use against him on the issue of gun control.

"If I understand it, and correct me if I'm wrong, if you go to a gun store and you legally purchase a gun, and then three days later you go out and start killing people, is the point of this lawsuit to hold the gun shop owner or the manufacturer of that gun liable?" Sanders asked. "If that is the point, I have to tell you I disagree. I disagree because you hold people in terms of this liability thing where you hold manufacturer's liable is if they understand that they are selling guns in an area getting into the hands of criminals, of course they should be held liable. If they are selling a product and the person who buys it legally, what you are really talking about is ending gun manufacturing in America. That's the implications of that, and I don't agree with that."

At times, Sanders appeared visibly frustrated and took a new tone with Clinton during interruptions. When the two rivals were going back-and-forth over the auto bailout, for example, and Clinton interjected, Sanders fired back: "Excuse me, I'm talking." During that same exchange, when Clinton went to interject again, Sanders replied: "Can I finish? You will have your turn." ("If you're going to talk, tell the whole story, Sen. Sanders," Clinton responded.)

The debate began with a discussion of the water crisis in Flint, where the debate was being held. Both Clinton and Sanders called for Michigan Gov. Rick Snyder to resign over the situation, calling for the state's leadership to take responsibility for its neglect.

"It is raining lead in Flint, and the state is derelict in not coming forward with the money that is required," Clinton said.

"What I heard and what I saw literally shattered me and it was beyond belief that children in Flint, Michigan, in the United States of America in the year 2016 are being poisoned," Sanders said.

Despite its prevalence in the headlines, the Republican race--and its front-runner, Donald Trump--only made brief appearances in the Democratic debate. Since her victories on Super Tuesday, Clinton has largely shifted her attention away from Sanders and toward Trump and the Republican field, but she redirected her focus on Sanders again Sunday night.

Asked about how they'd take on Trump, both Clinton and Sanders argued that they would be the Democrats' most effective standard-bearer come the general election.

Clinton said she will "look forward to engaging him" because his rhetoric will not "As of last night, Donald trump had received 3.6 million votes," she said. "There's only one candidate in either party who has more votes -- and that's me."

"I don't intend to get into the gutter with whoever they nominate," she later added.

Sanders argued that, based on general-election polling match-ups thus far, he's the better choice to face off against Trump.

"I would love to run against Donald Trump--and I'll tell you why," he said. "For a start, almost, not all, but almost every poll has shown that Sanders vs. Trump does a lot better than Clinton vs. Trump."

Clinton and Sanders will meet for another debate again in just a few days: they'll share the stage again on Wednesday in Miami, the day after the Michigan primary and six days before Florida votes.