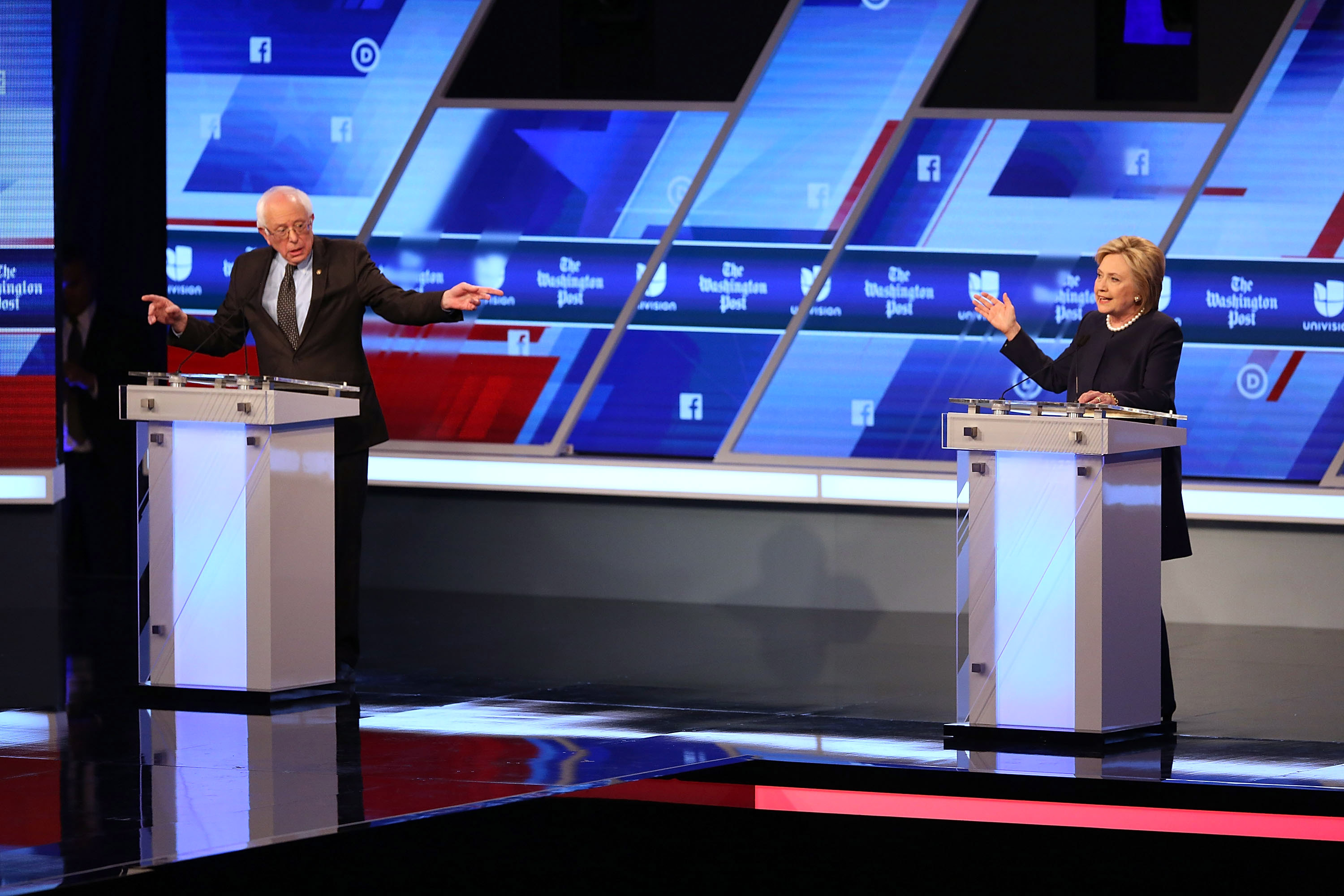 Fresh off of Bernie Sanders' surprising primary victory in Michigan, the stakes are higher than ever in the next round of nominating contests for the Democrats. Both Sanders and Clinton seemed well aware of that in Wednesday night's Florida debate, where they rolled out fresh batches of opposition research against each other and made bold promises to the voters.

"I am committed to introducing comprehensive immigration reform with a path to citizenship in the first 100 days of my presidency," Clinton promised in the Miami debate, conducted in both English and Spanish by Univision and the Washington Post.

With a clear eye on the Latino vote in Florida, the two candidates traded detailed and sharp critiques of each others' records on immigration reform. Clinton, trying to eliminate any chance of another upset, landed every punch she could against Sanders. She zeroed in on an opportunity to cast the Democratic socialist senator as sympathetic to authoritarian regimes like the Castro brothers. She even tried to associate Sanders with the Koch brothers, suggesting he's weak on the issue of climate change.

Clinton's strongest attacks were against Sanders' opposition to a 2007 comprehensive immigration reform bill.

"We have Republican support. We had a president willing to sign it. I voted for that bill. Senator Sanders voted against it," Clinton said. "Just think, imagine where we would be today is we had achieved comprehensive immigration reform nine years ago. Imagine how much more secure families would be in our country, no longer fearing the deportation of a loved one; no longer fearing that they would be found out."

Sanders defended that vote and returned fire, slamming Clinton for her record on multiple immigration issues. He criticized Clinton for urging then-New York Gov. Eliot Spitzer in 2007 to drop a plan to provide driver's licenses to undocumented immigrants. Sanders also attacked her approach to the wave of undocumented children who came into the U.S. from Central America in 2014. "I said welcome those children into this country, Secretary Clinton said send them back," Sanders said.

Clinton called this a "misrepresentation" of her position, "I did say we needed to be very concerned about little children coming to this country," she said. "And when they got here, they needed, as I have argued for, legal counsel, due process, to make a decision. We need to end private detention, we need to end family detention."

The former secretary of state then made her own bold attack, claiming that Sanders voted for "indefinite detention" for undocumented immigrants and stood with vigilante "minute men" taking up outposts at the Southern border.

And in 2006, when Senator Sanders was running for the Senate from Vermont, he voted in the House with hard-line Republicans for indefinite detention for undocumented immigrants, and then he sided with those Republicans to stand with vigilantes known as Minute Men who were taking up outposts along the border to hunt down immigrants.

Sanders responded, "No, I do not support vigilantes, and that is a horrific statement, an unfair statement to make," arguing that Clinton was mischaracterizing a vote he took on a bill that included many different pieces of legislation.

"I will stand by my career, political career fighting for workers, fighting for the poorest people in this country. Madame Secretary, I will match my record against yours any day of the week," Sanders added.

As they parsed their respective records, the two Democrats also made firm commitments to immigrant communities: "I will not deport children," Clinton said. Asked if she could also promise not to deport undocumented immigrants who don't have a criminal record, she responded, "That's what I'm telling you."

Sanders also said, "No, I will not deport children from the United States of America," and similarly said he would not deport immigrants without criminal records.

The focus on Latino issues also put Sanders' record as a self-identified socialist under the microscope. The moderators showed footage of the Vermont politician from 1985 in which he had seemingly positive things to say about the Castro regime.

"What that was about was saying the United States was wrong to try to invade Cuba, was wrong trying to support people to overthrow the Nicaraguan government," he explained. "The key issue here was whether the United Sates should go around overthrowing small Latin American countries."

It's unclear how much damage those past remarks could do to Sanders, given that a significant portion of his support comes from younger voters less concerned with the flaws of socialism. Even so, Clinton used the opportunity to strike:

"He praised what he called the 'revolution of values'... I just couldn't disagree more if the values are that you oppress people, you disappear people, even kill people for expressing their opinions," she said to cheers. "That is not the kind of revolution of values I ever want to see anywhere."

"I just think it's worth pointing out that the leaders of the fossil fuel industry, the Koch brothers, have just paid to put up an ad praising Senator Sanders," she said. "They did just put up a little video praising you for being the only Democrat who stood with the Republicans to try to eliminate the Export-Import Bank, which has helped hundreds and hundreds of companies here in Florida be able to export their goods and employ more Floridians. So from my perspective, you sided with the Koch brothers."

Sanders responded, "The Export-Import Bank is often called the bank of Boeing, because Boeing corporation gets 40 percent of the revenue. It is corporate welfare and yes, I oppose corporate welfare."

While the attack raised a substantive policy difference between the two candidates on the issue of the Export-Import Bank, anyone familiar with Sanders' record would understand he doesn't "side with the Koch brothers." However, it's very possible that the voters' lack of familiarity with Sanders is contributing to Clinton's significant leads in Florida and other upcoming states like Ohio.

Meanwhile, Clinton tried to remind voters of the politicians and political eras they should be familiar with -- the Bill Clinton, George W. Bush and Obama years.

"Senator Sanders is always criticizing the two recent Democratic presidents -- President Clinton and President Obama," she said. "And that's fine, but I wish he would criticize and join me in criticizing George W. Bush, who I think wrecked the economy and created the conditions for the great recession. You know, at the end of the '90s, we had 23 million new jobs. Incomes went up for everybody. We were talking earlier about what needs to be done for Latinos and African Americans. Well, we were doing it by the end of the '90s. Median family income went up 17 percent. For minorities, it went up even more."

Clinton may be trying to associate her policies with the economic growth of the Clinton and Obama administrations, but she also acknowledged Wednesday night that she doesn't share the charisma of those two Democrats. That much has become clear as she continues to compete against the relatively unknown socialist senator from Vermont.

"Look, I have said before and it won't surprise anybody to hear me say it, this is not easy for me," she said when confronted with a question about voters who do not trust her. "It's not easy to do what I think is right, to help people... I am not a natural politician, in case you haven't noticed, like my husband or President Obama. So I have a view that I just have to do the best I can, get the results I can, make a difference in people's lives, and hope that people see that I'm fighting for them."