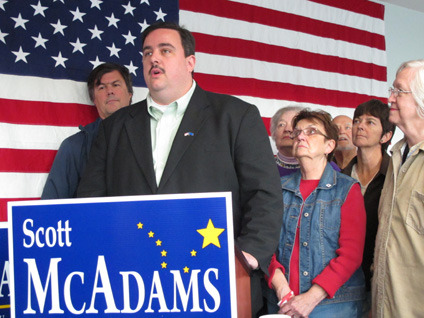 Amid signs that Democrat Scott McAdams could triumph in red-state Alaska's contentious three-way Senate battle, the Democratic Senatorial Campaign Committee (DSCC) is out today with a 30-second ad attacking incumbent Lisa Murkowski. It's the latest indication that Murkowski - who is running as a write-in - is now considered the candidate to beat in the race.

(Watch the video at left.)

"Maybe it was the fancy cocktail parties or all those pretty monuments. Whatever the reason, Lisa Murkowski has gone Washington," a narrator intones in the ad before targeting Murkowski's record on social security, Wall Street and "deficit exploding budgets."

The ad reflects Democrats' hope that former Sitka Mayor McAdams, who has polled in third place behind Murkowski and Republican Joe Miller for much of the race, will benefit from a split Republican vote on Election Day coupled with the inherent difficulties of running as a write-in candidate.

A recent poll by Public Policy Polling shows Joe Miller leading Murkowski and McAdams by a seven point margin, 37 percent to McAdams and Murkowski's 30 percent each.

But most signs indicate that the Tea Party candidate - who has been plagued by a recent flurry of controversy and missteps - has lost his edge in the race.

Now, Republicans find themselves in a tough position: After endowing Miller with full party support upon his initial primary victory against Murkowski, the GOP leadership is hedging its bets.

See all the Ratings for Senate, House and Governors in an Interactive Map

"We are supporting the nominee of our party, which is Mr. Miller," Texas Sen. John Cornyn said on ABC's "This Week" over the weekend - before emphasizing that the primary GOP goal was a Republican win for the state.

"I think that polls are very close now between Senator Murkowski and Joe Miller," Cornyn said. "And what we want to make sure of is that the Democrat doesn't win."

Democrats, meanwhile, see a glimmer of hope in Miller's struggles - and New York Times pollster Nate Silver has said that the Alaska Senate race is the Democrats' best shot at picking up a Republican-held seat.

"We believe that Scott McAdams actually has a real chance of winning this race," New Jersey Senator Robert Menendez said on "This Week." "Mr. Miller has obviously plummeted because it's about ideology versus about Alaska. Lisa Murkowski wanted to privatize Social Security. Scott McAdams is all about Alaska, so I think he has a real opportunity here."

Miller has, in recent days, split his attacks between Murkowski and McAdams. Meanwhile, former Alaska Governor Sarah Palin has been working hard on Miller's behalf - rallying for the Tea Party candidate in Alaska and hitting the Republican establishment and media during appearances on Fox News.

"The things that this fellow has had to put up with up against the GOP machine and the Democrats and the liberal media in Alaska, it's no wonder that the numbers are tightening in that race," Ms. Palin said in an interview with Fox's Greta Van Susteren on Sunday.

Political analysts speculate that, unless Miller or McAdams is a decisive winner on Tuesday night's elections - an outcome that appears increasingly unlikely - it might be weeks before the state sees a Senate ruling.

Because of her write-in candidacy, votes for Murkowski would take much longer to calculate, in part because the computers that analyze ballots do not read handwriting. Those votes will not be analyzed at all, however, unless the votes for all write-in candidates - of which there are currently about 150 - come in either ahead of or within half a percent of the lead candidate.

Complicating the process further is the fact that Alaska waits 15 days after a state election to allow for all of the absentee votes to come in. Theoretically, then, if the cumulative write-in candidates appear to be within close range of Miller or McAdams following Tuesday's election, examination of write-in votes would wait until mid-November.

If Murkowski is re-elected to Alaska's Senate seat, she will be only the second person in American history to win a major electoral contest as a write-in candidate. The only previous person to do so was Strom Thurmond in 1954.