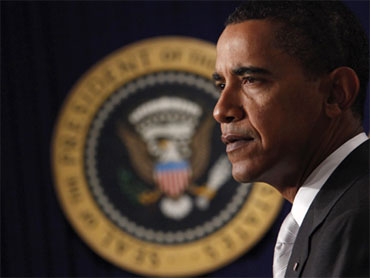 Democratic congressional leaders predicted passage of health care legislation within a few months despite undimmed Republican opposition, claiming momentum Thursday from and renewed commitment from lawmakers fresh from a month of meetings with constituents.

Increasingly, events in the Senate Finance Committee appeared pivotal, precursor to likely votes in both the House and the Senate by early October. "I'm confident the president will sign a bill this year," said House Speaker Nancy Pelosi of California.

Mr. Obama's speech to a joint congressional session Wednesday night was a sweeping defense of changing a health care system that he and others contend could bankrupt the world's largest economy.

While effusively praising Mr. Obama's speech from the night before, Pelosi and Senate Majority Leader Harry Reid of Nevada signaled separately the president may not prevail in his call for legislation that allows the federal government to sell insurance in competition with private industry.

Reid said that while he favors a strong "public option," he could be satisfied with establishment of non-profit-cooperatives, along the lines expected to be included in the bill taking shape in the Finance Committee.

Pelosi, who has long favored a measure that allows the government to sell insurance, passed up a chance to say it was a nonnegotiable demand.

As long as legislation makes quality health care more accessible and affordable, "we will go forward with that bill," she said.

Democrats are divided over the public option in both houses, liberals strongly in favor and many moderates against it. Critically, though, it appears that any chance for Republican support would evaporate if legislation permits immediate, direct competition between the government and insurance industry.

On the morning after his speech, Mr. Obama renewed his campaign for passage of his top domestic priority. Declaring that too many individuals are being denied coverage, he said, "It is heartbreaking and it is wrong and nobody should be treated that way in the United States of America. Nobody!"

He also cited new Census statistics showing that the number of uninsured has risen to 46.3 million from 45.7 million in 2007.

In general, the legislation would provide new protections to Americans with insurance, help the uninsured afford coverage, require most individuals to carry coverage and aim to slow the growth of medical costs overall.

The measure would be paid for through reductions in planned Medicare spending and tax increases. Medicare is the government-funded health insurance program for the elderly.

Mr. Obama has said his approach will not result in higher deficits, but Congressional Budget Office estimates dispute him.

Most Republicans made clear during the day that Mr. Obama's speech had done nothing to lessen their opposition. But they were peppered with questions about Rep. Joe Wilson of South Carolina, who shouted "You lie" at the president during the speech.

Asked if the episode embarrassed him as party leader in the House of Representatives, Rep. John Boehner of Ohio, said, "I think that Mr. Wilson made it clear that he said his behaviour was inappropriate, and he apologized for it. And I'm glad he did." 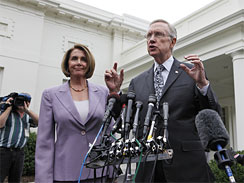 (AP Photo/Charles Dharapak)
After months of missed deadlines caused by internal division among Democrats and Republican opposition earlier in the year, neither Pelosi nor Reid (both seen at left in front of White House) was willing to outline anything more than a broad timetable for action on the legislation. But increasingly, it appeared that events in the Finance Committee would determine the pace.

There, Sen. Max Baucus of Montana has said he will convene the panel the week after next to vote on legislation that would meet Mr. Obama's goal of expanding health care, providing consumer protection to those with coverage, and slowing the growth of medical spending overall.

Baucus long ago embraced the proposed co-ops rather than direct government competition with industry, and it appears unlikely liberals have the votes to overrule him.

Democrats account for 13 members on the 23-member committee, but Baucus, Sens. Jeff Bingaman of New Mexico and Kent Conrad of North Dakota have been involved in intensive bipartisan negotiations, and Sens. Tom Carper of Delaware and Blanche Lincoln of Arkansas are part of the party's moderate wing and unlikely to support a liberal alternative.

Mr. Obama met Thursday afternoon with Carper, Lincoln, and a dozen other moderate Senate Democrats, some of whom have expressed concerns about costs and oppose a public plan.

Whatever bill the Finance Committee approves must be blended with legislation approved earlier in another panel, and is expected to reach the Senate floor by early October.

Baucus told reporters the president's speech had been "confidence-building" for those involved in weeks of painstaking bipartisan negotiations.

"It's uncannily similar to what we're working on," he said, avoiding mention of the disagreement over government insurance sales. "The president's speech kind of breathed new life into what we're doing because this is basically what our proposal is."

In the Wednesday night speech, Mr. Obama was battling to win back flagging public support for revamping a system that has left millions of Americans without health insurance, drives thousands into bankruptcy each day and consumes nearly 20 per cent of the country's economy.

The United States is the only developed country without a universal program of health care coverage. While many Americans are dissatisfied with the health care system, attempts to change it are politically explosive.

Mr. Obama's speech amounted to an attempt to restart the health care debate after a summer in which Republican critics confronted Democrats at town hall meetings and on television.

"They hit us with their best shot; distortion, misrepresentation, and obstruction," Pelosi said. But she said Democrats had "sustained the effort admirably" and now "we're in a better place to go forward."