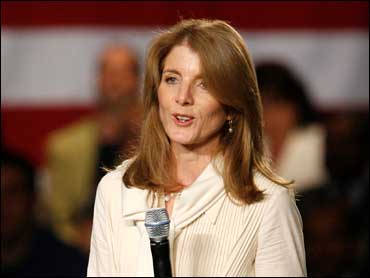 This story was written by Charles Mahtesian.

Barack Obama's path to the presidency included beating what had been one of the nation's most powerful families. But, in an unusual twist, his election last month is helping accelerate the trend toward dynasty politics.

His secretary of state will be Hillary Clinton, the wife of the former president. The Senate seat she'll vacate is being pursued by Caroline Kennedy, the daughter of a president and the niece of two senators. Joe Biden's Senate seat may go to his son Beau. Colorado Sen. Ken Salazar, Obama's pick for Interior Secretary, could end up being replaced by his brother, Rep. John Salazar.

And Obama's own seat could go to the son of the Rev. Jesse Jackson Sr. - less likely now in light of developments in the Rod Blagojevich scandal - or to the daughter of Illinois' current House speaker.

The U.S. Senate could end up looking like an American version of the House of Lords - and Republicans have begun to take notice.

"Democrats seem to lack a common man who can just win a good, old-fashioned election," said Rep. Tom Reynolds (R-N.Y.), the former chairman of the National Republican Congressional Committee. "They've got seat-warmers, seat-sellers and the making of pillows for the seats of royalty. No wonder the public wonders what's going on in Washington."

While Obama's election and subsequent Cabinet appointments may have accelerated the trend toward dynasty, he's hardly responsible for it. There is a rich bipartisan history of dynasty in American politics that dates all the way back to the Founding Fathers; Obama-Biden actually represents the first winning ticket since 1976 without a son or a grandson of a U.S. senator on it.

In 2008, the storied Udall clan, sometimes referred to as the Western Kennedys, saw two members elected to the Senate- Mark from Colorado and Tom from New Mexico. In 2010, they could be joined in the Senate by Florida's Jeb Bush, the son and brother of presidents and the grandson of a senator.

All told, it's entirely possible that the Senate will be comprised of nearly a dozen congressional offspring by the end of Obama's first term as president.

"It's a very interesting American phenomenon, even though there is a line in the Constitution that says no title of nobility may be granted by the United States," says Stephen Hess, a senior fellow emeritus at the Brookings Institution and the author of "America's Political Dynasties." "Given where we started, it's interesting that this has developed."

Almost everyone agrees that the high cost of elections is making the world's most exclusive club seem even more exclusive. According to some estimates, the cost of winning Clinton's New York Senate seat in the special election in 2010 and the general election in 2012 will be in the neighborhood of $70 million.

"It's an enormously expensive process to run for the United States Senate," added Edgar, who ran unsuccessfully for the Senate in 1986. "And once someone runs for a Senate seat, there is a sense of ownership."

At the moment, the Senate includes six sons or daughters of Congressmen.

And the House - the "people's House" - isn't exactly bereft of hereditary influence, either.

In the 111th Congress next year, there will be 21 House members with a parent who also served in Congress - plus five wives who currently hold their late husbands' seats.

If Caroline Kennedy is appointed to the New York Senate seat - once held by her uncle, Sen. Robert F. Kennedy - she would be joined in Congress not only by another uncle, Sen. Ted Kennedy, but also by his son, Rhode Island Rep. Patrick Kennedy.

Caroline Kennedy picked up support Tuesday from Rep. Louise Slaughter (D-N.Y.), but Kennedy's relative inexperience has some other New York Democrats feeling wary - even if she does come wrapped in a legendary political name.

Republican New York Rep. Peter King - who is considering his own run for the seat - asked why New Yorkers would feel more comfortable with Kennedy "than with people who have worked in the trenches and worked their way up."

Then he answered his own question.