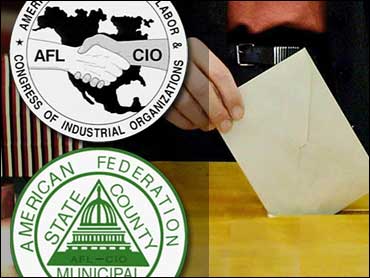 This column was written by The Editors Of National Review Online.

At the AFL-CIO forum in Chicago this summer, Barack Obama declared that "special interests have been shaping our trade policy. That's something that I'll end." The other Democratic presidential candidates have also denounced "special interests" at various points in their campaigns. But Obama and his rivals have had nothing to say about the special interest that sat right in front of them at the forum - the one that really is shaping our trade policy. That would be the labor unions.

According to the National Institute for Labor Relations Research, unions contributed $925 million to political campaigns and causes during the last presidential-election cycle. Nearly all of that money went to Democrats. On top of those nine digits, unions routinely run massive get-out-the-vote drives to help Democrats, and their officers often volunteer full time for Democratic campaigns while collecting salaries from their union jobs. In recent election cycles, unions have spent 87 to 90 percent of their money from PACs and "527" groups on Democratic candidates and causes.

In return, Democratic politicians have supported policies that benefit union leaders at the expense of union members, as well as the non-members who are forced to pay dues in many states.

On March 1, only two House Democrats voted against a union-backed measure that, in effect, would have taken away the right of workers to a secret-ballot vote on whether to unionize. This would have left them vulnerable to harassment and intimidation. Every Democratic freshman supported the measure (known as "card check"). In the end, supporters of card check could not muster the 60 votes needed for cloture in the Senate, but not a single Senate Democrat cast a "no" vote.

Labor unions have also acquired a vise grip on the Democrats when it comes to trade. Former moderates on this issue - even many Democrats whose districts host major ports and benefit from free trade - now vote against almost every new trade pact. Their putative objections concern environmental and labor standards in developing nations, but opposing free trade also has the nice consequence of keeping the AFL-CIO happy.

Notwithstanding their professed interest in oversight and accountability, the House Democrats passed a Department of Labor appropriations bill this summer that cut $2 million from the budget for the Office of Labor and Management Standards, which oversees how unions spend dues money. During the Bush administration, this office has finally gotten unions to start complying with decades-old laws requiring itemized disclosure of their spending and their officers' conflicts of interest. No wonder union leaders don't want it funded.

More and more, union leaders are also putting their organizations on the record on issues unrelated to labor or collective bargaining. The National Education Association spends less than 15 percent of its dues money representing members in the workplace, according to disclosure forms filed with the Department of Labor. It gives its leftover millions to groups that do such things as resist Social Security reform and litigate to prevent restrictions on abortion. It has also declared its support for a government-controlled and taxpayer-funded health-care system. Other unions advocate such causes as same-sex marriage, higher taxes (which their workers would have to pay), retreat from Iraq, and an amnesty for illegal immigrants that would adversely affect the wage growth of many union members.

In ages past, when the worker's lot was much worse than it is today, union leaders stuck to what they did best: collective bargaining and improvement of work conditions. They fought for the well-being of their workers, but frequently opposed government intervention in the workplace, understanding that a free market would create jobs and opportunities for all. Today's labor leaders simply fight to preserve their power, often at the expense of both the workers they represent and the country as a whole. Unfortunately, their closest political friends hold a majority in Congress.
By The Editors
Reprinted with permission from National Review Online