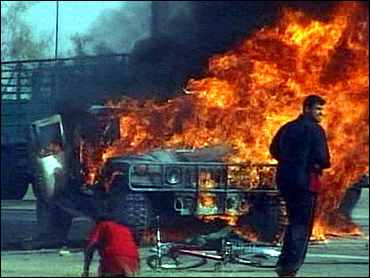 Blackwater USA triggered a major battle in the Iraq war by sending an unprepared team of security guards into an insurgent stronghold, a move that led to their horrific deaths and a violent response by U.S. forces, according to a congressional investigation released Thursday.

The private security company, one of the largest working in Iraq and under scrutiny for how it operates, also is faulted for initially insisting its guards were properly prepared and equipped and for impeding the inquiry by the Democratic staff of the House Oversight and Government Reform Committee.

Peter Singer, a senior fellow at the Brookings Institution, has been warning about the dangers of relying on private contractors since early in the war, reports CBS News national security correspondent David Martin.

The results of the staff inquiry come less than a week before Erik Prince, a former Navy SEAL and Blackwater's founder, is scheduled to testify before the Oversight and Government Reform Committee, which is chaired by Rep. Henry Waxman, D-Calif., a longtime critic of Blackwater.

The March 2004 incident involving Blackwater was widely viewed as a turning point in the Iraq war after images of the mutilated bodies of the four guards were seen around the world. Four days after the Blackwater guards were killed, a major military offensive, known as the Battle of Fallujah, began.

The combat lasted almost a month in Fallujah, which is 40 miles west of Baghdad. At least 36 U.S. military personnel were killed along with 200 insurgents and an estimated 600 civilians, according to the congressional investigation.

Blackwater called the committee's account of the mission "one sided," reports Martin.

In a statement, Blackwater spokeswoman Anne Tyrrell said the committee has documents that show the Blackwater team was "betrayed" and steered into "a well-planned ambush."

The report does not acknowledge "that the terrorists determined what happened that fateful day in 2004," Tyrrell said. "The terrorists were intent on killing Americans and desecrating their bodies."

But one of the company's own employees described its Baghdad operations as "flat out ... sloppy," reports Martin.

Blackwater's director of operations in Baghdad sent an e-mail to his headquarters, saying: "I need new vehicles. I need new (communications gear), I need ammo. I need (weapons). … ground truth is appalling."

Yet the next day, Blackwater set out to escort a convoy through Fallujah - a mission another private security firm had turned down as too dangerous.

Donna Zovko, whose son, Jerko "Jerry" Zovko, died in the Fallujah incident, said she hopes the staff report will lead to more oversight and more discussions about the use of contractors.

"Congress can't change anything for my son. He is gone and nothing can bring him back," Zovko said. "But let's see what they can do for the others out there because someone needs to care for these contractors. Blackwater cares about nothing but the mighty dollar."

The families of the four killed contractors filed suit against the company in January 2005, saying that Blackwater's cost-cutting measures led to the deaths. That lawsuit is still pending as a federal judge tries to determine whether it should be heard in arbitration or in open court.

Blackwater has argued in court that it is immune to such a lawsuit because the company operates as an extension of the military and cannot be responsible for deaths in a war zone.

The results of the probe cast Blackwater in more negative light. On Sept. 16, 11 Iraqis were killed in a shoot-out involving Blackwater guards protecting a U.S. diplomatic convoy in Baghdad.

The State Department, one of Blackwater's largest customers, has opened an investigation into the incident. Deputy Secretary of State John Negroponte told Congress Wednesday that the incident in Baghdad was tragic, but called private security companies such as Blackwater essential to operations in Iraq.