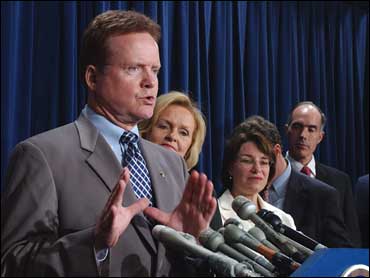 Senate Democrats are confident they can pass legislation to give troops more rest between Iraq deployments, a measure aimed at pressing the Bush administration to change its war policy.

The proposal by Sen. Jim Webb, D-Va., would require troops get as much time at their home station as their deployments to the war front.

Active-duty Army units currently are on 15-month deployments with a promise of no more than 12 months rest. Marines who spend seven or more months at war sometimes get six months or less at home.

Republicans blocked a Senate vote on S. 2012 in July with a filibuster. A version of the bill passed in the House last month, by a vote of 229 to 194.

Defense Secretary Robert Gates called the proposal a dangerous "backdoor way" to draw down additional forces beyond what President Bush wants to keep in Iraq.

"If we get this next phase wrong - no matter how you feel about how we got to where we are, the consequences of getting this wrong for Iraq, for the region, for us are enormous," Gates said Sunday.

If it passes, Gates said he would recommend the president veto it. That would require 67 senators to override.

Sen. Jack Reed, D-R.I., responded that shorter breaks were creating an undue strain on U.S. troops and their families.

When President Bush made a stop at an air base in Anbar province in Iraq earlier this month, a Marine captain briefing him on the conditions facing service members expressed the troops' frustration that with less time at home between longer and more frequent deployments in Iraq, soldiers and their families were facing increasing stresses, and training stateside was suffering.

"They deserve the same amount of time back home as they stay in the field," Reed said.

The comments represented the latest political clash over the unpopular war. President Bush last week announced plans for a limited drawdown (which were mandated anyway by limits on the lengths of tours of those participating in the "surge"), but indicated as many as 130,000 combat forces would stay in Iraq well past 2008. Gates suggested troop levels might be reduced to 100,000 by the end of 2008, but only if certain conditions were met.

"When letters go unanswered, when suggestions go ignored, when the pleas of the public fall on deaf ears, how are the American people expected to continue to support flawed policies and undefined missions?" Murtha, D-Pa., said in prepared remarks. "Today, we have a clear choice between responsible congressional oversight and this administration's blindness."

The Senate was scheduled to resume debate this week on legislation affecting the U.S. commitment in Iraq, including Webb's proposal.

Supporters of Webb's measure say it has at least 57 of the 60 votes needed. It would need 67 votes to override a veto.

"I think we have a good chance of getting to the 60 votes to call for a change in policy. I hope we get there in the next couple of weeks," he said.

Gates has countered those who support more rest for troops by saying, if Webb's amendment were enacted, it would force the Pentagon to consider again extending tours in Iraq beyond the current 15 months, and force greater use of the National Guard and Reserves.

Meanwhile, concurrent to the debate about how many soldiers and Marines remain in Iraq, are the continuing rotation of National Guard and Reserve forces.

At the same time, some National Guard troops are making their returns, including more than 1,000 troops from Indiana, who spent 16 months of a 22-month deployment in Iraq; a company of Ohio National Guard soldiers returned from a year-long deployment to Iraq; and Tennessee welcomed back 180 soldiers.

Mr. Bush said last week that he approved a plan by Gen. David Petraeus, the top U.S. commander in Iraq, to withdraw 5,700 troops from Iraq by the holidays and reduce the force from 20 combat brigades to 15 brigades by next July. There are about 169,000 U.S. troops in Iraq.

The president has ordered Petraeus to make a further assessment and recommendations in March.

Loathe to accept a congressional timetable for any withdrawal of American forces, Mr. Bush has compared America's future in Iraq to the peacekeeping role U.S. troops play in South Korea, where they have been stationed for decades.

This has not gone down well with Democrats and some Republicans going into next year's elections.

"This is all about handing off this problem to the next president," Sen. Joe Biden said Friday. "There is no plan to win, no plan how to leave, no plan how to end this."

"While I welcome the modest drawdown of our troops that the president has ordered, it is not a sufficient response to the lack of political reform by Iraqi leaders," Collins said.

The Associated Press' Hope Yen and Kimberly Hefling contributed to this report.