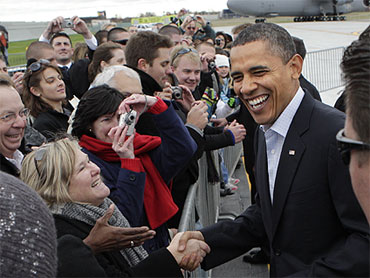 Bracing for Monday's final burst of campaigning, President Barack Obama implored voters to remember that GOP policies failed to prevent the recession, while top Republicans said the public will deliver a harsh verdict on his stewardship of an anemic recovery.

Alaska was shaping up as the most unsettled state in the midterm election's closing act. Democrats said it's conceivable they could score an upset Senate win there.

Desperate to minimize game-changing losses around the country, Democrats put their biggest weapons on the road Sunday.

Mr. Obama and Vice President Joe Biden rallied about 8,000 supporters in Cleveland, urging them to keep Gov. Ted Strickland and a clutch of imperiled House Democrats from being ousted.

"I'm pleading with you," Clinton told an audience in Nashua, N.H., "give John Lynch a massive victory." Lynch, the three-term governor, faces a strong challenge from Republican John Stephen.

Experts now say it's almost certain the GOP will pick up more than the 39 seats needed to regain control of the House and could gain as many as 60, reports CBS News White House correspondent Bill Plante.

On "Face the Nation" Sunday, Minnesota Governor Tim Pawlenty said voters are reacting to what he called the "overreach" of the government.

"So people are angry. They're also worried about the future. And they're saying this is not what we thought we were getting when we elected President Obama and the Democratic Congress. Now the pendulum is clearly swinging back towards Republicans."

Sarah Palin, the 2008 GOP vice presidential nominee, told "Fox News Sunday" that voters will say: "You blew it, President Obama. We gave you the two years to fulfill your promise of making sure that our economy starts roaring back to life again."

Mr. Obama, ending a two-day, four-state campaign swing, flew home from Cleveland on Sunday in time to welcome trick-or-treaters to the White House. Aides said he planned no more campaign travel before Tuesday's elections, but he might do radio interviews.

The president told the crowd at Cleveland State University that Republicans want voters to forget the economic recession that hit during a GOP presidency.

Democrats were hoping a late innings scramble in Alaska might help them head off chances of a GOP Senate takeover. With GOP nominee Joe Miller stumbling, and incumbent Republican Sen. Lisa Murkowski making a rare write-in effort after losing the primary to Miller, little-noticed Democrat Scott McAdams might find a way to sneak through to victory. The Democratic Senatorial Campaign Committee has poured more than $160,000 into the once-ignored race.

Republican leaders said they had not abandoned Miller.

The Democratic National Committee was airing a new ad featuring Obama that warns of record cuts in education and rollbacks in financial accountability if Republicans take control of Congress.

Palin and Obama's Impact in 2010 Races
Hot Ads of the Week: The Gloves Come Off

In many races, large numbers of voters have made their choices. In Ohio, where Democrats could lose up to six House seats, more than 721,000 votes have been cast. California officials already had in hand almost 2.5 million ballots, and Florida officials had almost 1.7 million.

More than 13.5 million votes have been cast early, either at ballot boxes or by mail. Four years ago, during the last congressional midterm election, some 19 million people voted before Election Day.