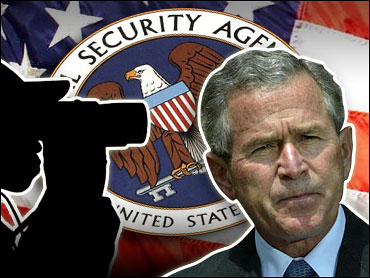 Some Democrats say they never approved a domestic wiretapping program, undermining suggestions by President Bush and his senior advisers that the plan was fully vetted in a series of congressional briefings.

"I feel unable to fully evaluate, much less endorse, these activities," West Virginia Sen. Jay Rockefeller, the Senate Intelligence Committee's top Democrat, said in a handwritten letter to Vice President Dick Cheney in July 2003. "As you know, I am neither a technician nor an attorney."

Rockefeller is among a small group of congressional leaders who have received briefings on the administration's four-year-old program to eavesdrop — without warrants — on international calls and e-mails of Americans and others inside the United States with suspected ties to al Qaeda.

The government still would seek court approval to snoop on purely domestic communications, such as calls between New York and Los Angeles.

Cheney vigorously defended the program on Tuesday, saying "it's not an accident that we haven't been hit in four years."

He said he believes if there's any backlash coming because of the revelations about the surveillance program, it's "going to be against those who are suggesting somehow that we shouldn't take these steps to defend the country."

Some legal experts described the program as groundbreaking. And until the highly classified program was disclosed last week, those in Congress with concerns about the National Security Agency spying on Americans raised them only privately.

President Bush was defiant and unapologetic about the program at his final news conference of the year on Monday, reports CBS News chief White House correspondent John Roberts.

"I just want to assure the American people that, one, I've got the authority to do this; two, it is a necessary part of my job to protect you; and three, we're guarding your civil liberties," Mr. Bush said.

And he had harsh words for the officials who leaked the story – a devastating blow, he said, to national security.

"It is a shameful act by somebody who has got secrets of the United States government and feels like they need to disclose them publicly," he said.

Mr. Bush insists both the Constitution and congressional authorization for the war on terror give him the power to circumvent the courts when eavesdroping on suspected terrorists – and he says he is determined to keep doing it. But many scholars believe the program is utterly and completely illegal.

"I think their opinion is ludicrous," David Cole of Georgetown University said. "I think Congress expressly addressed whether the president could do this during war time and they said yes, but only for 15 days in an emergency situation. The president has now done it for four years."

Democrats charged that the president may have operated outside the law and tipped the balance of power, reports CBS News correspondent Gloria Borger.

"Where does he find in the Constitution the authority to tap the wires and the phones of American citizens without any court oversight?" Sen. Carl Levin, D-Mi., said.

The president, however, bristled at the suggestion that he was assuming unlimited powers.

"To say 'unchecked power' basically is ascribing some kind of dictatorial position to the president, which I strongly reject," he said angrily. "I am doing what you expect me to do, and at the same time, safeguarding the civil liberties of the country."

The spying uproar was the latest controversy about Mr. Bush's handling of the war on terror. It follows allegations of secret prisons in Eastern Europe and of torture and other mistreatment of detainees, and an American death toll in Iraq that has exceeded 2,150.

The eavesdropping program was operated out of the NSA, the nation's largest and perhaps most secretive spy operation. Employees there appreciate their nicknames: No Such Agency or Never Say Anything.

Decisions on what conversations to monitor are made at the Fort Meade, Md., headquarters, approved by an NSA shift supervisor and carefully recorded, said Gen. Michael Hayden, the principal deputy director of intelligence.

"The reason I emphasize that this is done at the operational level is to remove any question in your mind that this is in any way politically influenced," said Hayden, who was NSA director when the program began.

Since the program was disclosed last week by The New York Times, current and former Congress members have been liberated to weigh in.

Former Sen. Bob Graham, D-Fla., who was part of the Intelligence Committee's leadership after the 9/11 attacks, recalled a briefing about changes in international electronic surveillance, but does not remember being told of a program snooping on individuals in the United States.

"It seemed fairly mechanical," Graham said. "It was not a major shift in policy."

Former Senate Democratic leader Tom Daschle said he, too, was briefed by the White House between 2002 and 2004 but was not told key details about the scope of the program.

Daschle's successor, Sen. Harry Reid, D-Nev., said he received a single briefing earlier this year and that important details were withheld. "We need to investigate this program and the president's legal authority to carry it out," Reid said.

Republicans, too, were skeptical.

Sen. Arlen Specter, R-Pa., chairman of the Senate Judiciary Committee, has promised hearings next year and said he would ask Mr. Bush's Supreme Court nominee, Samuel Alito, his views of the president's authority for spying without a warrant.

The question is: did the president break the law?

"Seems like most people outside the administration who are looking at this are saying so," says Early Show political analyst Craig Crawford.

"You know, this law, the Foreign Intelligence Surveillance Act, that everyone is calling FISA, gave plenty of powers to the government," Crawford said.

"In fact, they could order searches and wiretaps and get the court order after the fact. So there were a lot of very loose requirements already in the law. So it seems strange to bypass this law when it was so favorable to the government already."

Mr. Bush said the electronic eavesdropping program lets the government move faster than the standard practice of seeking a court-authorized warrant under FISA. "We've got to be fast on our feet, quick to detect and prevent," the president said.

And he was cool toward investigations. "An open debate would say to the enemy, 'Here is what we're going to do.' And this is an enemy which adjusts," he said.