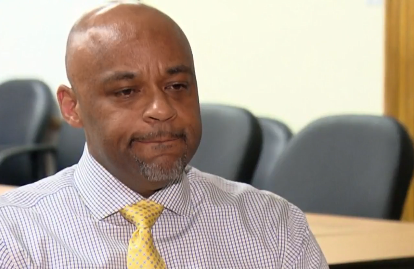 DENVER -- Denver Mayor Michael Hancock has publicly apologized for text messages he sent to a woman who once served as a member of his security team. The messages were sent to Detective Leslie Branch-Wise in 2012, CBS Denver reports.

The numerous texts were provided by the mayor's office to CBS Denver under an open records request. One reads, "You look sexy in all that black." It appeared on a cellphone with Hancock's name as the sender.

Branch-Wise did not reply directly to that part of the text.

Another text attributed to the mayor said, "Loved the short doo. You made it hard on a brotha (sic) to keep it correct everyday. :)"

In an interview with CBS Denver, Hancock acknowledged he stepped over a line. "It became too familiar, too casual. They certainly are not meant to be sexual in nature," he said.

Hancock said he sent "unprofessional" text messages to Branch-Wise, but his "behavior did not involve sexual advances or inappropriate physical contact."

The letter also contained a number of other allegations the mayor called "defamatory" and "untrue."

"There are no sexual advances, and never at any time in the six years had I known that she took offense to these text messages. Had I known, I would have apologized then as I am now, and taken responsibility for them, as I am now," he said.

In another text message the mayor apparently asked, "What are you doing tonight?"

Hancock replied, "Just giving you a hard time. I have to keep you balanced. All I hear from my friends is how fine you are."

KMGH-TV reports that Branch-Wise, who was on the security detail in 2011 and 2012, said, "I just want people to know that I'm a woman, I have children and I'm a victim of sexual harassment."

"It made me physically sick," she said. "It was extremely scary."

Branch-Wise, who said she does not intend to file a harassment claim, first raised allegations of sexual harassment in 2012 against one of Hancock's aides, who was fired four days later. The aide then sued for wrongful termination and ultimately settled with the city for $200,000.

Branch-Wise reached a $75,000 settlement with the city. Now, she says she regrets not holding the mayor accountable as well.

"If you are down here and your boss is up here and he's showering you with these inappropriate texts and sayings and making you feel uncomfortable, who do you tell if he's at the top?" she said. "It's crushing."

She said that she also worries about retaliation in her current job as a Denver police detective, although Hancock indicated that she has nothing to fear.

The mayor, in his interview with CBS Denver, said, "You know what, I'm apologizing and taking responsibility, and I hope that I get the opportunity to apologize to Detective Branch-Wise face to face, if she will allow me. I hope that happens. That's where I'm going to leave that right now. At this point in time, I think what's important now that it's been brought to my attention that she found our exchanges offensive that I apologize."

He said there were no legal matters or payments involved with the text messaging matter and he did not realize she considered them offensive.

He added that this was an isolated exchange and that this behavior did not go on with others.

"I sincerely apologize to Detective Branch-Wise. I apologize to my wife and family and to the people of Denver," he said.

Hancock added he supports all women in the workplace, and Branch-Wise is a valued officer.

The Denver Sheriff Fraternal Order of Police responded to the incident saying, "On behalf of Denver Sheriff FOP we back you 100%. No female officer should ever have to endure such egregious behavior from a so called trusted official."