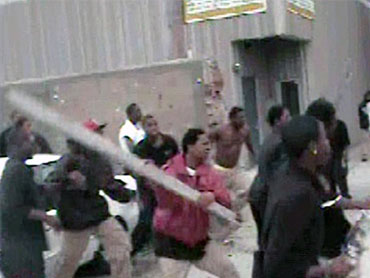 (My Fox Chicago)
White House spokesman Robert Gibbs said Wednesday that video showing 16-year-old high school student Albert Derrion being beaten to death in Chicago is "chilling" and that the president discussed the situation with advisors in the Oval Office that morning.
Gibbs also said the White House will soon be making an announcement concerning the video, which showed teens sharply kicking and hitting the honor student, though he declined to say when.

The press secretary called the video "among the most shocking that you can ever see."

There has been speculation that the video could hurt Chicago's chances of landing the 2016 Olympic Games, which the president will push this week in Denmark.

Gibbs was asked at his daily briefing if the incident is related to "the fact that there is lack of fatherhood, broken kind of family structure."

"I don't know the individual circumstances of those accused of taking part in the heinous crime," he replied. "I think in many ways a lot of these crimes are amazingly hard to explain. I can't imagine why anybody would do what you see being done on that video. Obviously, there are certain factors that we know have a tendency to contribute to -- dropping out of school, not being able to find work, all those sorts of things."

That led a reporter to say, "A lot of this is policy, but a lot of it is heart. How are you going to regulate the heart issue?"