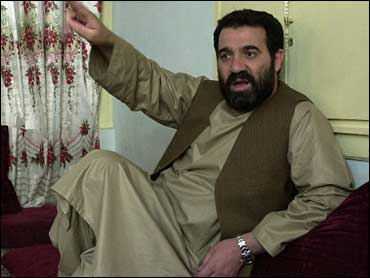 The most powerful man in southern Afghanistan is one many believe has links to militants and drug dealers, and who may have figured in the fraud that marred last year's presidential election. Yet despite calls by American authorities to have him removed from Kandahar, he remains.

The New York Times's Dexter Filkins writes today that Ahmed Wali Karzai, a businessman and elected representative, has been viewed as an obstacle to building an effective Afghan government presence and dislocating the Taliban's influence. But after months of wrangling and debate over his future, Ahmed Wali Karzai will be allowed to stay.

A senior NATO officer told The Times allegations against President Karzai's sibling include paying off the Taliban, money laundering, seizing land, and profiting from the opium trade. Evidence to support the allegations ranged from compelling to circumstantial, but was not enough to convince President Karzai to remove Ahmed.

"For President Karzai, he's looking at his brother, an elected official, and nobody has come to him with pictures of his brother loading heroin into a truck," the NATO official told The Times.

Plan B? American and Afghan officials say they hope Karzai (who has in the past helped U.S. officials communicate with Taliban insurgents, and is said to have been paid by the CIA for services rendered) can help convince militants to drop their insurgency.

"I absolutely think he can help us with reintegration," the NATO officer told the Times.

The decision to leave Karzai in place, writes Filkins, comes amid a buildup of American military forces in Afghanistan and President Obama's surprise visit to Kabul this past weekend to push President Karzai to clean up corruption.

For more of this story: