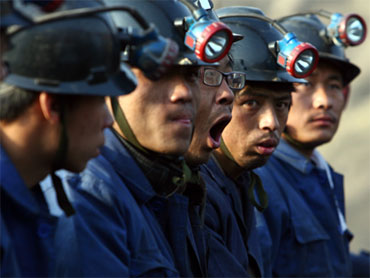 A month ago, China's premier ordered mining officials to go down into the shafts with their workers, but the step meant to improve safety in the world's deadliest mines hasn't saved lives.

More than 100 people have died in that time, with 21 people killed in two mine accidents reported Tuesday. State media have noted with surprising sharpness that none of the dead seemed to have been mine managers or bosses.

"Who knew that every boss who goes into the shaft is a god: Flooding, explosions, whatever it is, they can always fly free," the official Xinhua News Agency said in a pointed commentary Tuesday.

The editorial came in response to a weekend disaster, where a flooded mine trapped two dozen workers in northern China. Only two people escaped; both were managers.

At a news conference Monday near the mine in northern Heilongjiang province, one reporter asked: Had the managers even been inside the mine at all?

By Tuesday, both managers and the mine's owners were in police custody, China National Radio reported. It wasn't clear why.

"After the accident, only the bosses miraculously emerge. What could this mean?" the Xinhua commentary said.

In the latest accidents, lethal gas leaked into a coal mine in Dengfeng in central Henan province late Monday and killed nine workers, Xinhua said. On Tuesday morning, gas exploded at another coal mine in southwestern Guizhou province, killing at least 12.

The outspokenness by China's normally muffled state media - and Premier Wen Jiabao's order itself - points to a problem that has worried the country's leadership for years.

More than 2,600 people died in mining accidents in China last year, though deaths have decreased in recent years as the government closed many illegal mines.

But deaths jumped again in the first half of this year. Coal mine deaths through June were 1,261, up from 1,175 in the same period last year, Xinhua reported. A spokesman for the work safety administration told the China Daily newspaper the jump was due in part to China's recovery from the economic crisis.

Wen issued his order at a meeting of the State Council, China's Cabinet. "Coal mine and non-coal mine leaders should work shifts and descend into mine pits with workers," he said.

International mining experts say they know of no other country that requires mine bosses to go underground with workers. The U.S. Mine Safety and Health Administration has no such requirement, spokeswoman Amy Louviere said in an e-mail.

Enforcement of any order from the central government can be a challenge in vast China, but mining is especially tricky. Thousands of illegal mines, most of them small operations, exist to profit from the country's roaring need for coal, the main energy source for the economically booming nation.

"The only people in a position to change safety standards are mine managers. And their focus is as much production in as short a time as possible," said Geoffrey Crothall, spokesman for the Hong Kong-based China Labour Bulletin, which tracks industries in China.

A former mine consultant who works in China said he's not sure of the wisdom of regularly sending managers who aren't mining engineers underground.

"They will not have the skills and experience to inspect and locate problems or suggest remedial measures. They will be at risk from accident and will also divert resources to look after them," David Creedy, who now works for Sindicatum Carbon Capital, said in an e-mail.

But for China's state media, the presence of mining bosses is about making a statement.

"If these mine bosses have enough confidence in the safety of their own mining shafts, they could go down the shafts with their workers with complete assurance. So what does it mean if they haven't done so?" the Nanfang Daily commentary asked.